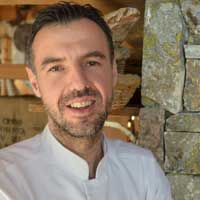 After only a few months in Val d’Isère, Benoît Vidal has earned his precious first Michelin star.“It is the star of friendship, and a wonderful human story”.

Everyone is talking about him in Val d’Isère.Régis Marcon’s (Bocuse d’or, three Michelin stars) second-in-command chose the mountains to express his creativity.Whilst difficult to prove himself in only a couple of months, Benoît Vidal is not someone who is afraid of a challenge.A long history in the greatest kitchens has given him a taste for risk-taking.As a young apprentice, he tasted the starred flavours of the Prunier kitchens, when it earned its second star.He continued his training with Michel Trama, who also had two stars, then found his first master in the person of Michel Guérard, one of the inventors of “nouvelle cuisine”.“I finally understood what thinking could bring to cooking, through the alliance of flavours, the balancing of tastes, lighter sauces.He was the one who found coherence between foie gras and vinegar - somethingthat is obvious today, but wasn’t at all at the time”.With slow, flexible cooking and light sauces, Benoît Vidal learned and quickly progressed.“I was thirsty for knowledge, and fuelled by my passion”.

A star with meaning

The chef recommended him to Régis Marcon (3 Michelin stars).And a new story of friendship began.“We share the same values.Régis Marcon influenced my career.He was the one who always indicated the direction to follow”.In the logical continuation of an impressive track record, Benoît Vidal decided to strike out on his own.At the Mas des Herbes Blanches, in the Lubéron (Provence region), he took over the management of the kitchens.The establishment had lost its star…Benoît Vidal got it back in 8 months.Then chance gave another direction to his career.The Mas des Herbes Blanches was sold.His private life was in freefall.So he chose to return to the man he considered to be his friend, his spiritual father, RegisMarcon.“He found the words to reignite my passion for cooking”.Régis Marcon introduced him to Jacques Le Privey, owner of the Atelier d’Edmond inVal d’Isère, who wanted more gastronomy in his restaurant.In a few months, Benoît Vidal had earned a Michelin star.“The mountain inspires me; it gives me a great deal of serenity.I will savour this star all the time.  It reminds me that my story has meaning, and of the friendship which was the driving force that led me to it.”

Julien Gatillon, the revelation of the Chalet du Mont d’Arbois 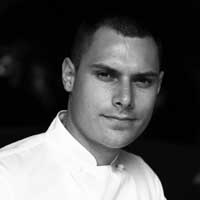 The revelation of an inventive, elegant chef in this refuge of good taste and savoir-vivre.

For a long time the Chalet du Mont d’Arbois has been unique in Megève, withthe Rothschild spirit condensed into one place.A cosy welcome, low-key savoir-vivre, good education, silky elegance, refined food, a skilfully maintained wine cellar... In this purring, warm atmosphere where luxury seems to be quite at home, with the swimming pool, golf course, the suites and cosy rooms in a preserved, reassuring world where the “1920” restaurant seems to be a jewel.The best surprise of the past few months, however, comes from the kitchens.Along the lines of creative chefs, who love good products, Julien Gatillon, at only 27, ensures the continued success of the Chalet.He created a surprising menu from his heart, inspired by the mountains, the lake, the sea and the ‘terroir’, before moving onto game birds.“What I love more than anything is the possibilities that have been given to me and the loyal, knowing and demanding clientele who come to the Chalet du Mont d’Arbois”, says the Chatelleraultnative (Vienne).

The chef returns to his roots

He knows Benjamin de Rothschild’s Chalet off by heart, having worked there for a season a dozen years ago.He has learned to look for, work with and cook crayfish, fera and char fish passing by poultry or game animals.His exemplary career is regularly cited by top chefs in their gastronomy courses.Firstly Philippe Rochat, in Switzerland, where for three seasons he was assistant chef to Benoit Violier, who took on the restaurant.There he learned rigor and the perfect taste.Today he passes on the art of recognising and working with good products, without altering them.With that lesson in mind, he chose to go to Quebec for a year to the “Relais et chateau” La Pinsonnière, near Charlevoix, between sea and mountains, before coming back to France and joining the team led by Yannick Alléno at the Meurice Hotel.He took on the Parisian rhythm as assistant meat chef, then one of the three sous-chefs working with the future three Michelin starred chef.

The Rothschild spirit lives on

Today, he has accepted the challenge - and with his talent - delivers an accomplished menu which enchants crunchy Guilvinec lobster with tacos, or sublimes monkfish medallions pearly with a madras curry sauce.   He offers Iberian suckling pig, “black from head to toe” and duck breast from the Combes, roasted in cherry juice, or 45 day-old Galicia entrecote steak with a crock of seasonal vegetables.Everything is precise, detailed, colourful and elegantly presented.Olivier Alglave, from the Meurice Hotel in Paris, manages the dining room and keeps the wine cellar keys.He may propose, why not, the Blanc de Blanc champagne from the Barons de Rothschild collection. It is not a surprise to learn that Julien Gatillon has chosen to entrust the desserts to 33 year old Charles Gros, who has worked with Ducasse, and who we were able to appreciate for the first months after the opening of the “Coeur du village” in La Clusaz.The gourmet winter looks promising at the Chalet du Mont d’Arbois. 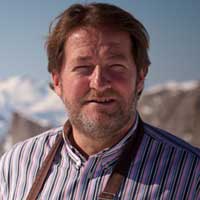 Since taking over the reins of the Panoramic on the Tignes glacier in autumn 2011, the chef, Jean-Michel Bouvier, has undertaken major changes to improve the image and rediscover the good taste of this mythical but slightly ageing place.

Everything has changed from the cuisine - now that of a great Chef - to the decoration by his wife, Catherine.  She has married the finest fabrics and materials, in the same way he mixes the products he has chosen -with the omnipresent passion of the mountains and climbing, with care and discretion.

Photographs of real-life ascents of alpine peaks are displayed on the walls, whilst in the kitchens, meat sizzles on the wood fire that Jean-Michel Bouvier has chosen to open out onto the restaurant dining room.White furs cover the chairs, whereas the woodwork has been stripped of its varnish and left ‘natural’.Beige and coffee coloured fabrics have replaced the traditional red curtains, for more light.Reminiscent of Swiss mountain refuges, the Panoramic wants to be more modern and cosy, in a “natural luxury" way.

Only the name and the altitude have remained the same - ThePanoramic 3032 metres.These two strengths attract the eyes and taste buds of skiers.Winter and summer, they come in large numbers to the immense terrace, where they admire the 360° panorama of the surrounding peaks - theGrande Motte (3653m) nearby, the Grande Casse (3855m), the highest point in the Vanoise, the majestic Sassière (3747m), and in the distance the Mont Blanc (4810m).

To satisfy winter sports aficionados, who are gourmets but in a hurry to hit the slopes, Jean-Michel Bouvier has divided the Panoramic into 3 different areas:the snack bar directly at the cable-car arrival point, where you can devour a real mountain hamburger with Beaufort cheese and local bacon between two runs ;the self service, where you can quickly taste meals made of regional seasonal produce, or spend more time on the home-made dessert buffet; finally the more surprising gourmet restaurant, where fresh fish from the Bourget and Geneva Lakes expertly invite themselves at the top of the Espace Killy.