These classics of French mountain gastronomy are easy to make in resort, or when you get back home as a heady reminder of the culinary heights! Bon appétit!

No week’s skiing would be complete without a Savoyard fondue; it is the epitome of Alpine gastronomy! This cheese-based speciality creates a sociable, fun meal, making it even more appealing. Originally a Swiss dish, it was adopted by the French mountainous regions who replaced the Swiss Emmental with their own cheeses. In the Savoie and Haute-Savoie regions, the flavoursome Beaufort reigns supreme, whilst in the Jura and the Vosges, Comté takes pride of place. Creamy and full-flavoured, the Savoyard fondue is child’s play to make - another plus point! Here is a recipe kindly provided by the Syndicat de Défense du Beaufort - Beaufort Cheese Defence Union ( www.fromage-beaufort.com).

First of all, rub the inside of an enameled saucepan or fondue pot with the garlic clove. Next, grate the cheese (remove rind first). Pour the wine into the fondue pot and bring it to the boil it on the hob, then add the cheese, stirring constantly with a wooden spoon. Stir in the pepper and when the cheese has melted, add the Kirsch, stirring gently. When the mixture begins to thicken, it is ready to serve. Place over the burner around which your guests are sitting, so that they can dunk their chunks of bread into the fondue and enjoy! Be aware though that according to tradition, if you drop your bread in the pan you have to carry out a dare! 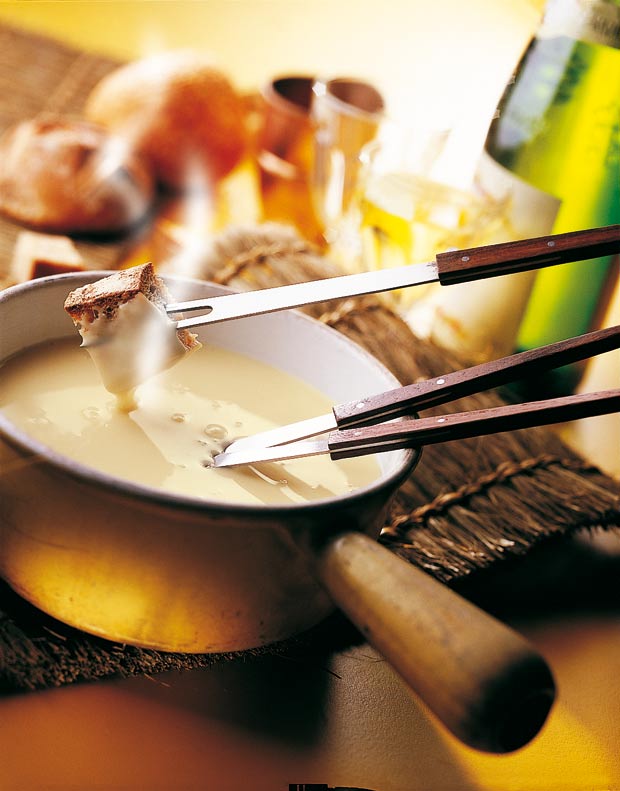 Parents around the world have told and retold the ‘stone soup’ folktale to their children, but do they know the eponymous recipe behind the tale? Made from vegetables, stone soup is one of the most famous traditional French country recipes. Our ancestors used to put stones in when it came to the boil, which would move in the pan and ‘blend’ the vegetables. This is a particularly clever way of mixing the vegetables, especially when you’re on holiday and you don’t always have blender or food processor to hand! It also offers the added bonus of maintaining the flavour of the vegetables. Chamonix-based Michelin star chef Mickey Bourdillat particularly enjoys preparing this winter dish par excellence. He kindly gave his version of the recipe to the Sherpa supermarket group for their cookery collection.

It is a very easy recipe to follow: roughly chop the vegetables and bacon and put them in the saucepan to sweat in the butter, before covering with water. Add salt and pepper, followed by the stones, and simmer for approximately 4 hours. Chef’s tip: serve with garlic croutons and grated Beaufort. 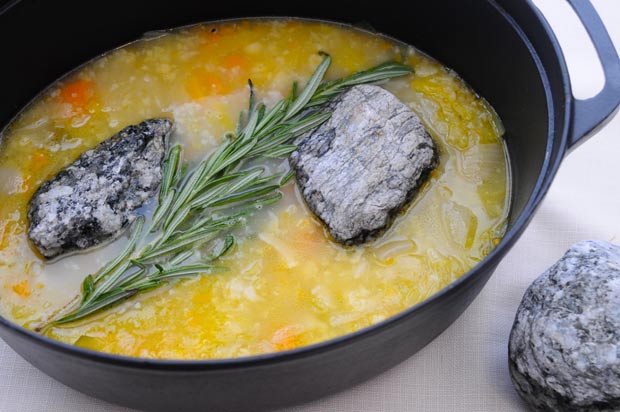 To disbunk misconceptions about mountain that sticks to your ribs and is hard to digest, here is a recipe from the Syndicat du Reblochon (Union of Reblochon) (www.reblochon.fr), Carrot, avocado and reblochon salad à l'orange. Your guests will love the look and taste of this vitamin-packed and colourful starter, and kids will love it too!

Allow 20 minutes preparation time. Firstly, zest an orange, then cut the carrots julienne style and finely slice the avocado. Put the juice of two freshly squeezed oranges, the olive oil, hazelnut oil, zest, salt and pepper in a salad bowl and whisk together. Cut the Reblochon into squares and add to the orange flavoured vinaigrette, along with the carrots and avocado. Chill until you ready to serve and serve with toasted bread. 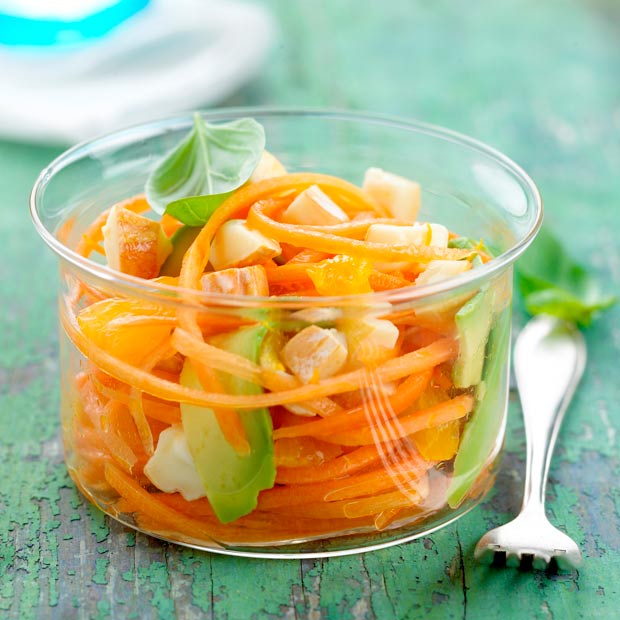 Less well known than tartiflette or Savoyard fondue, berthoud is a typical dish from Chablais in the Haute-Savoie region. It’s a great one to add to your selection of cheese-based specialities. Whilst its main ingredient is not as well known as Reblochon or Beaufort, Abondance is another excellent quality Savoie cheese (Protected designation of origin).

La Marque Savoie, ambassador of the finest Savoie produce, has kindly suggested the following recipe to tantalize your guests’ taste buds: pre-heat the oven to 160 °C, then peel the garlic and use to rub the base of 4 small plates before putting them in the oven. Roughly chop the remaining garlic and divide up into equal amounts. Thinly slice the Abondance and put onto the plates, adding a little pinch of salt and a generous pinch of pepper. Add nutmeg to taste, along with a drop of white Vin de Savoie and the red Chambéry Vermouth. Put under the grill for 10 minutes. Serve bubbling hot with the chunks of bread or new potatoes.

This dish is the Auvergne’s take on the Savoyard tartiflette! If you go to there you’ll definitely want to try one of the many different versions of truffade! It is a very easy recipe to follow, making a filling dish that is not difficult to digest.

Peel and slice the potatoes. Sautee them in a casserole dish and season with garlic, salt and pepper. When they are cooked, add the Cantal tome cheese. Mix with a wooden spoon and serve straight away with a green salad and a slice of country ham. 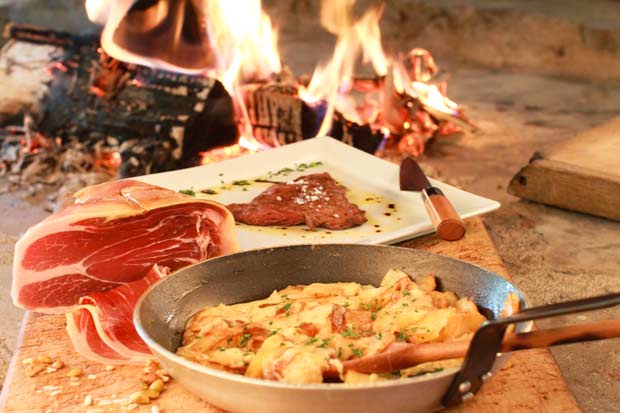 Ouillade or ollada, is a warming dish that will appeal to everyone’s appetite! It is the Catalan version of Auvergne hotpot, made with pork and vegetables. Culinary heritage historian Eliane Comelade (www.eliane.comelade.com) has been promoting this traditional Pyrenean recipe to Pyrenean chefs, encouraging them to add it to their menus, raising awareness of the flavoursome, varied and well-balanced Catalan culinary art. For the past 26 years, Eliane Comelade has been running cookery workshops focusing on traditional recipes such as ollada, which is the most well known.

Her recipe: blanche the haricots blancs (or to save time, buy a tin of pre-cooked lingot beans) and the cabbage. When it’s all cooked, put them in the casserole dish with the meat, diced potatoes, lard and mixed herbs, then cover with water. Add the olive oil, put the lid on and leave to simmer for 3/4. Originally it used to be cooked on the coals for three to four hours in an earthenware dish. Some gourmets add slices of grilled black pudding when ready to serve. If you make a large portion and don’t manage to finish it all, fear not, this soup is even better when reheated! 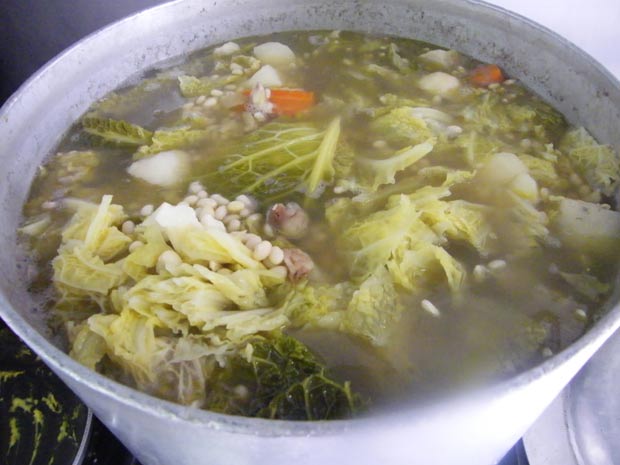