Made famous, for some, by the Tour de France, for others, for their role in the history of mountaineering, or simply for their breathtaking panoramas, these 15 sites in the French mountains are not to be missed.

The Galibier Pass (2645 metres), at the border of the French “departments” Hautes-Alpes and Savoie, owes its fame, first and foremost, to the Tour de France.  The world’s top cycling challenge has sent riders over the pass 59 times, including a new race to the summit in 2011, the highest in the history of the tour.  Before it became one of the mythical summits of the Grande Boucle in 1911, and even before the construction of the first road in 1879, the Galibier Pass was a point of passage between the Dauphiné (France) and Piedmont-Sardinia, for smugglers, exiles and delinquents fleeing the law.

The Plateau of Glières (Haute-Savoie)

A limestone plateau situated in the centre of the Bornes massif, Glières, at an average altitude of 1450 metres, is an important site of the French Resistance.  A base was established at the foot of the plateau, at Manigod, in order to train the maquisards, members of the Resistance movement.  In 1944, Glières was selected as the site for munitions air drops from England, from February 14th until March 10th.  Two days later, an attack by the Germans caused  considerable losses : 150 of the 465 maquisards were killed.  This historic sacrifice has become a legend of the Resistance. 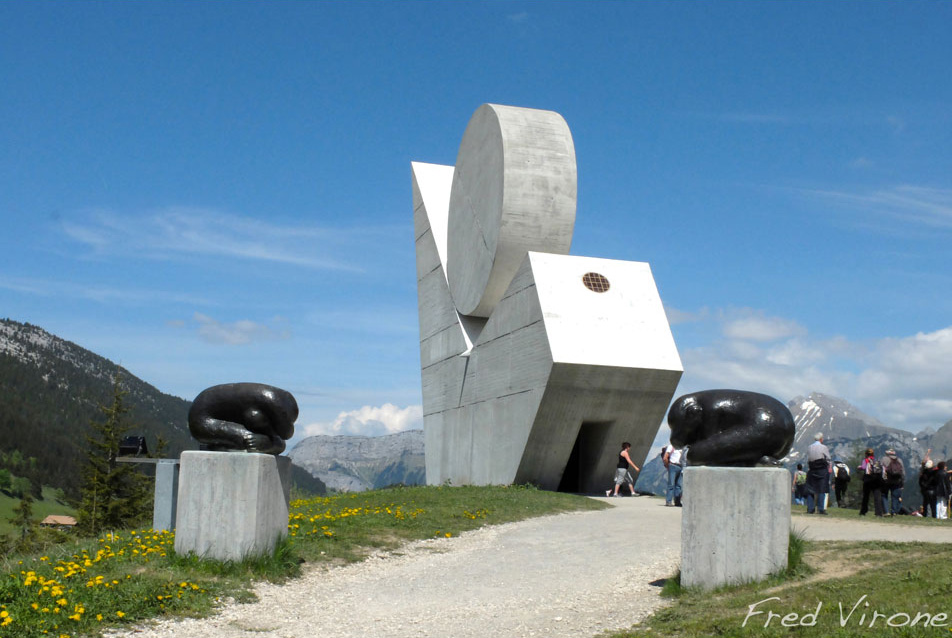 The Sanctuary of Notre-Dame-de-la-Salette (Hautes-Alpes)

Perched at 1770 metres of altitude, above the village of Corps, this sanctuary is one of the most important pilgrimage destinations in Europe.  On September 19th, 1846, twelve years before the apparitions at Lourdes, a « beautiful lady » appeared before two young shepherds, Maximin Giraud and Mélanie Mathieu-Calvat, 14 and 12 years old.  She warned that the people would be plagued by disease and famine if they neglected piety and prayer, before disappearing in a halo of light.  Two days later, Mélanie returned to the site of the vision, where the spring, always dry in summer, flowed with water.  Since that day, pilgrims and the ill have journeyed to the spring in order to be treated.  A basilica was constructed between 1852 and 1865, and a community of priests was established in order to minister to the pilgrims.

A UNESCO World Heritage Site since 1997, the imposing Gavarnie Corrie is a rock wall rising up 1700 metres with a circumference of 14 kilometres.  Described by Victor Hugo in his celebrated poem « Dieu » as « an impossible and extraordinary object, » and a « colosseum of nature, » it is the location of Europe’s largest waterfall (413 metres high) as well as the famous Brèche de Roland, a 100 metre high, 40 metre wide gap between the cliffs, offering a spectacular view. 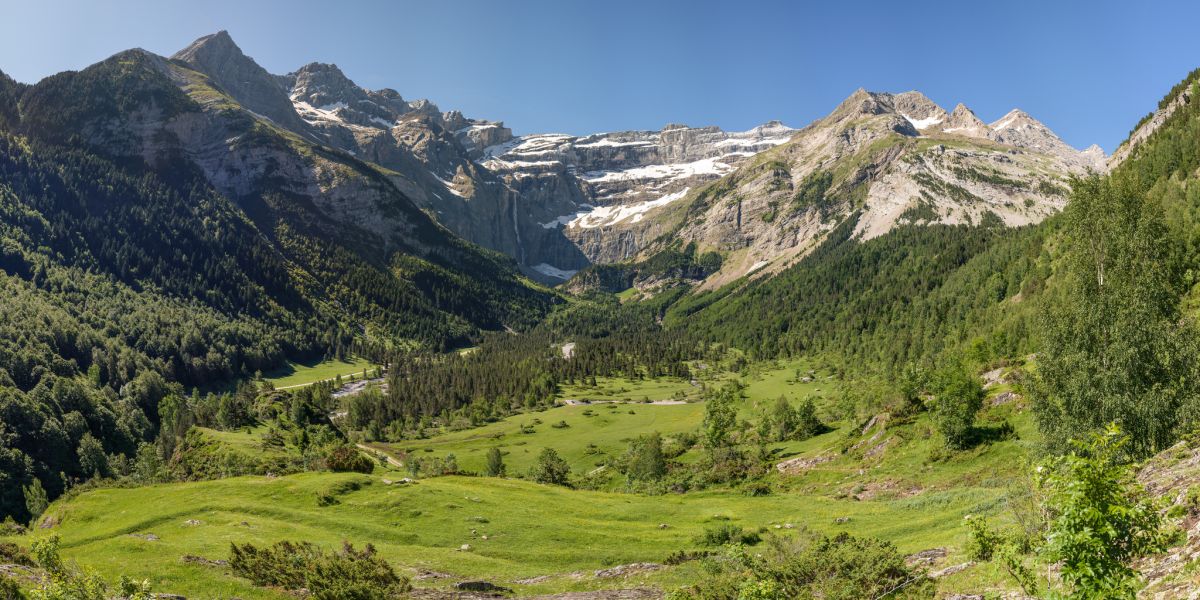 Like a protruding tooth in the eastern Vercors, surrounded by steep cliffs of 350 metres, Mont-Aiguille (2086 metres) is considered to be one of the seven wonders of the Dauphiné.  Under the ancient regime, it was even more highly regarded than the giants of the Alps.  In November 1492, the king of France, Charles VIII, ordered Antoine de Ville, the lord of Dompjulien and a renowned climber, to climb to the summit.  This historic act, later considered to be the birth of alpinism, was carried out in June 1492, accompanied by a team of seven and with the use of ladders, ropes and grapples. 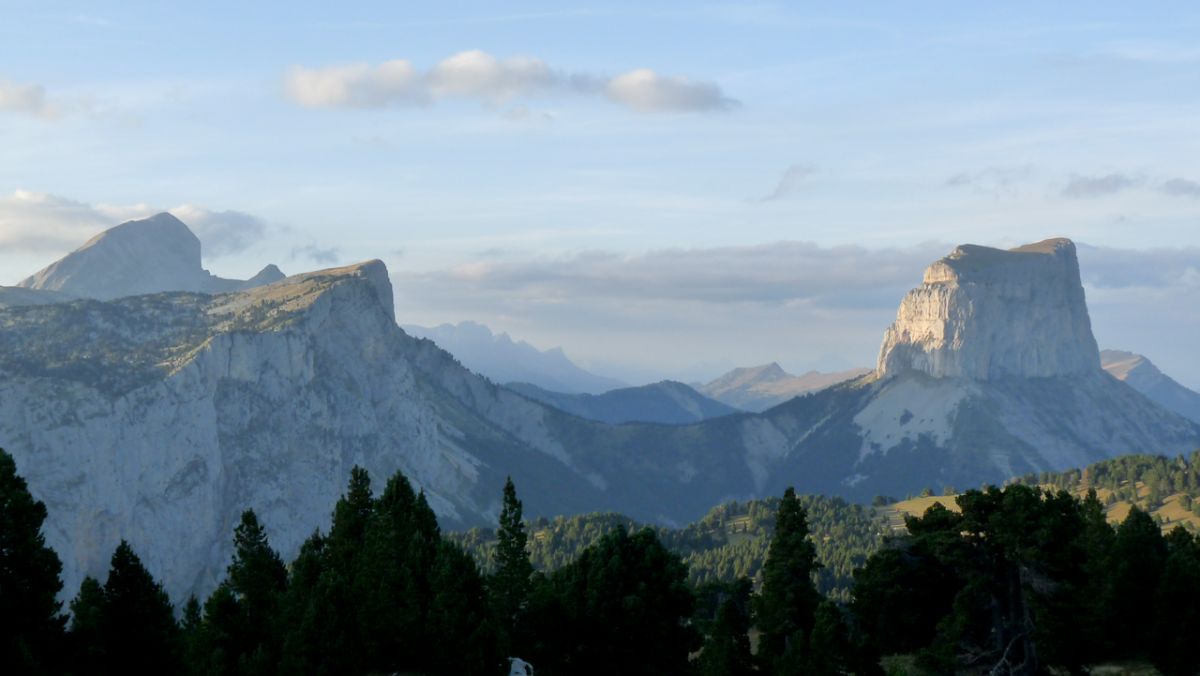 This volcano of the Puys mountain chain, in the Central Massifs, is the namesake of the department in which it is located.  Dormant for over 12 000 years, the Puy-de-Dôme was designated one of the Grands Sites de France in 2008.  It was at its summit that, on July 22 1876, Emilie Alluard inaugurated France’s first permanent meteorological laboratory.  It also became known with the installation of a television tower in 1956, and for the fact that on many occasions, between 1952 and 1988, its slopes have been part of the route of the Tour de France, with a notable mano-a-mano between Anquetil and Poulidor in 1964.  From June 2012, the site will be accessible only by rack train, which will follow the present route of the road. 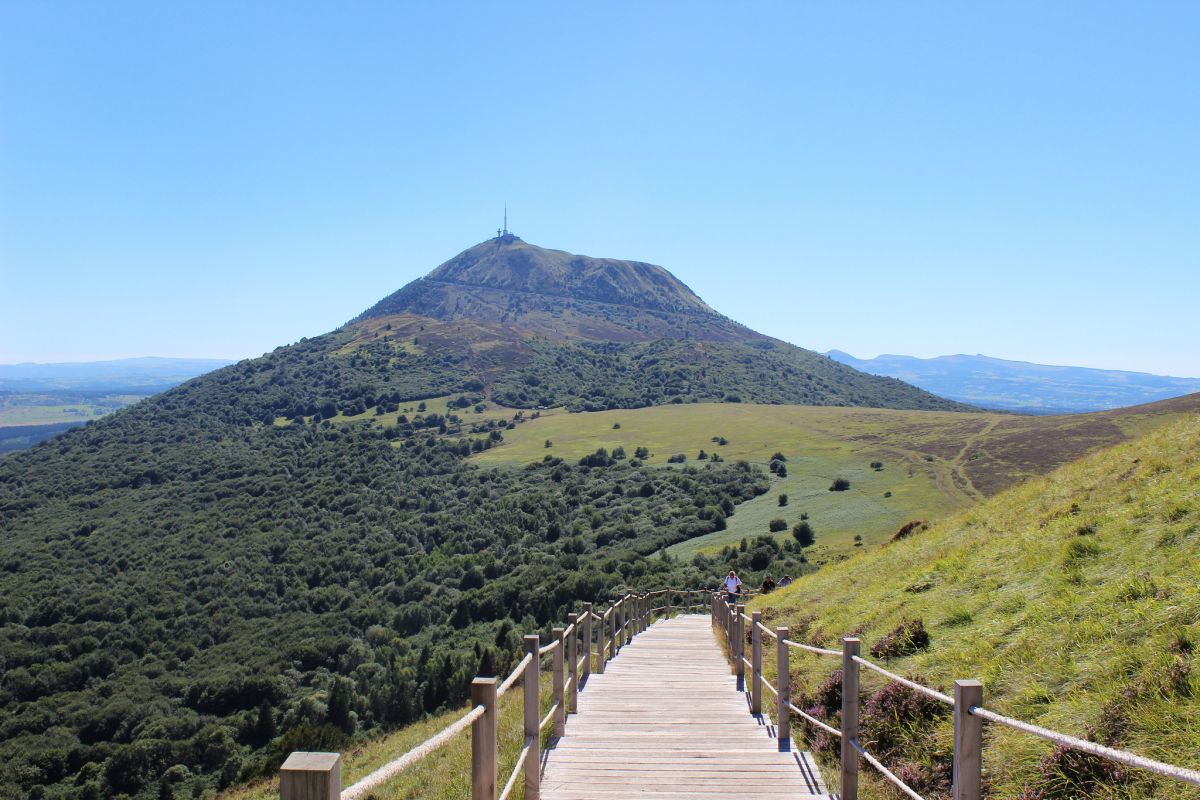 The most visible summit from the village of Chamonix – more so than Mont Blanc – l’Aiguille du Midi, at 3842 metres of altitude, was scaled for the first time in 1818, although it was 1856 before climbers succeeded in reaching the summit.  In 1955, the inauguration of a chairlift, beginning in Chamonix and climbing the north face, made the Aiguille du Midi a top destination.  The third highest chairlift in the world, its construction took four years.  Each year, over 540 000 people, whether they be skiers, mountaineers, or simple pedestrians, take the trip to the summit in order to admire one of the most beautiful panoramas of the Alps. 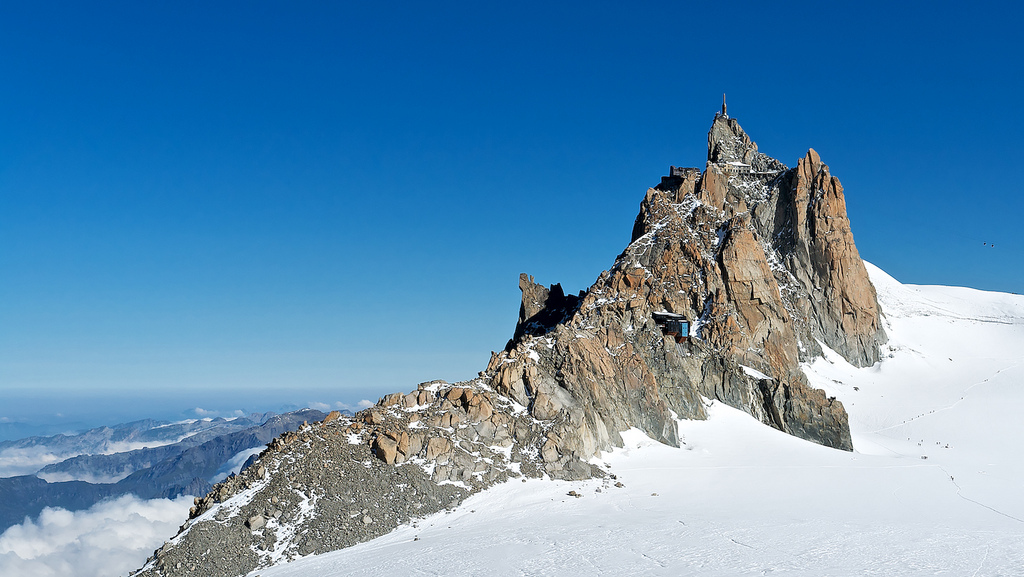 The forts of Esseillon (Savoy)

The five forts of Esseillon, named Marie-Thèrèse, Marie-Christine, Victor-Emmanuel, Charles-Albert, and Charles-Félix, were constructed on a glacial rock bar in the Maurienne valley.  The construction, which took place between 1818 and 1833, followed the guidelines of Marc-René de Montalembert, meaning that the forts are built in such a way that they protect each other.  The forts were built under order by the Austrian Chancellor Metternich, with the aim of blocking the passage of the French army.  When the Savoy became part of France in 1860, they were no longer necessary, and were eventually abandoned in 1945.  Restoration efforts began in 1970. 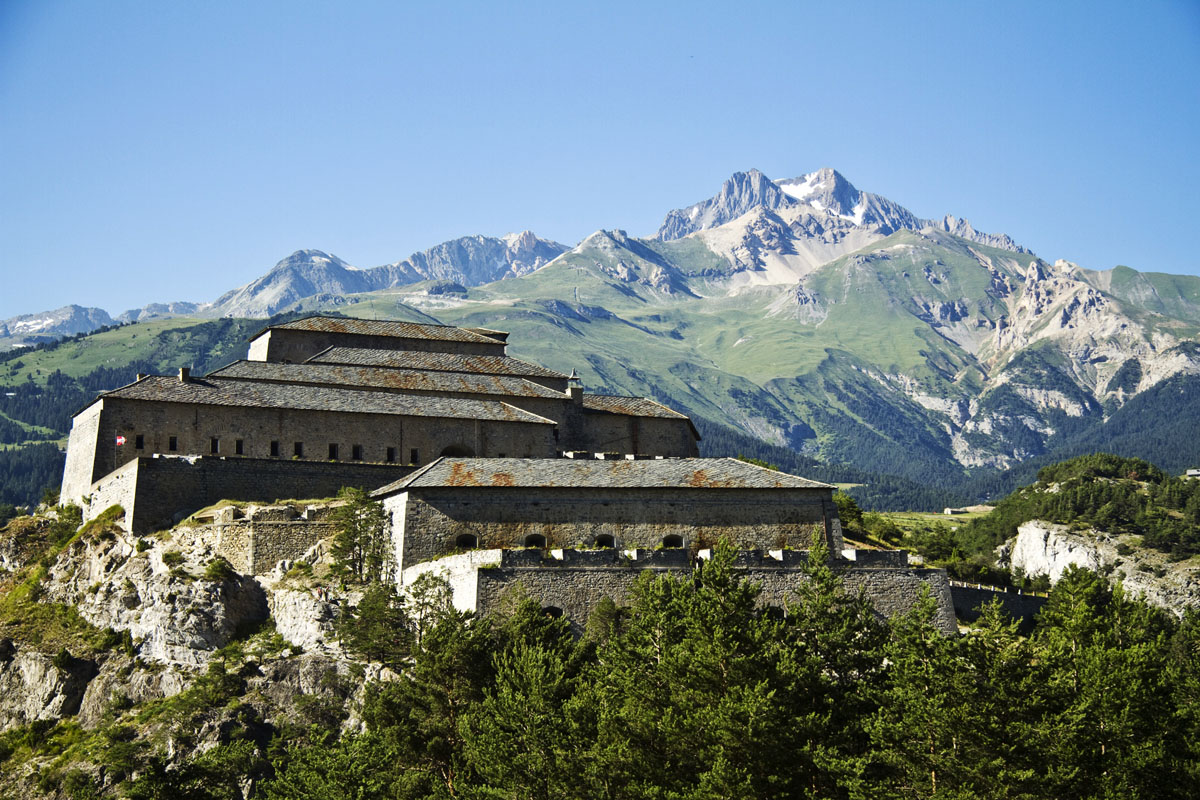 This summit, at the southern edge of the Vosges massif (altitude 1247 metres), classified as a Grand Site National, offers a grandiose panorama over the Black Forest to the east, the Bernese Alps - to Mont Blanc, which can be sighted on a clear day - to the south, and to the ridges of the Vosges to the north.  Reputed for its air quality, it is home to a wide range of animal life (chamois, peregrine falcon, raven, spotted nutcracker, lynx) and varied flora (yellow gentian, blueberry).  Various hiking trails, including the GR5, GR7, and GR59 cross over it.  It is also a favourite destination for mountain bikers, hang-gliders, alpine and cross-country skiers. 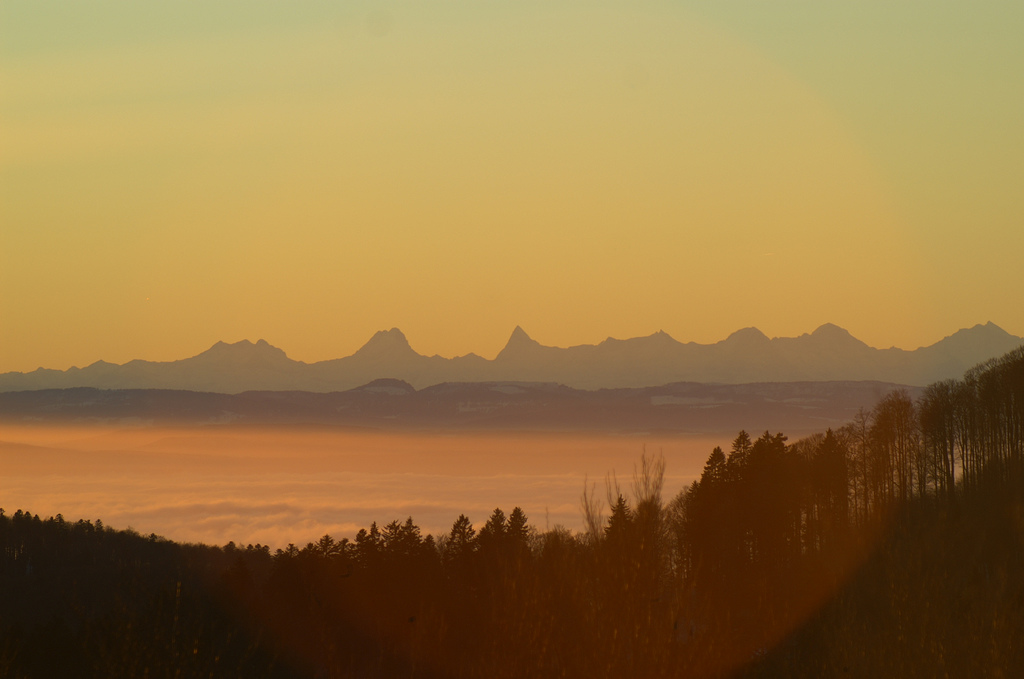 The world’s largest alpine lake, 582 km², extends over French and Swiss territory.  Fed and drained by the Rhône river, at 372 metres of altitude, it descends to a maximum depth of 310 metres, and its complete water cycle (draining and refilling) takes an average of 11 years.  Like the lakes Annecy and Bourget, it was formed by the Rhône glacier after the last ice age, around 15 000 years ago. Another, more poetic theory says that the lake was formed by the tears of an angel who was ordered by God to leave the Northern Alps. At times difficult to navigate due to violent storms, which can result in waves up to 2.5 metres high, Lake Geneva counts at a given time up to 150 professional fishers, who come for the perch, whitefish, trout and arctic char. 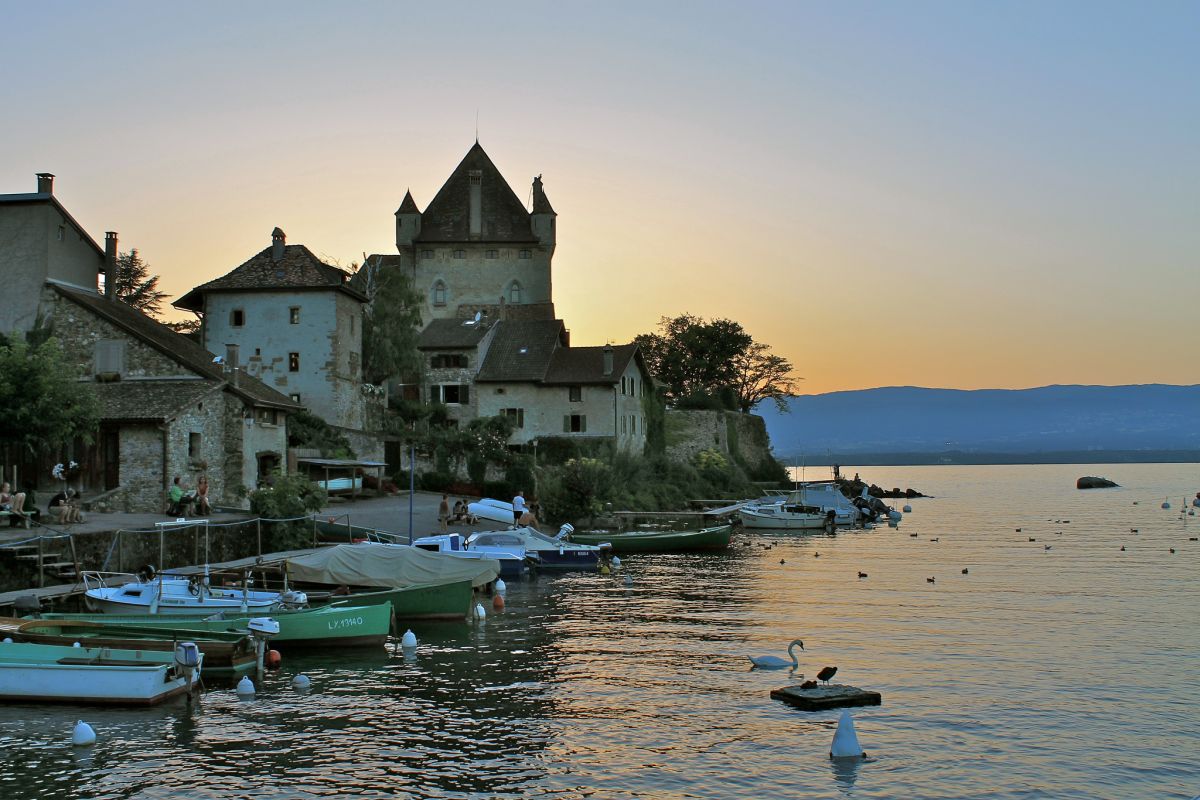 The highest point of the Alps, measuring 4810.5 metres, Mont Blanc was not always such a popular destination as it is today.  Until the 18th century, it was known as the « cursed mountain, » due to the « ice demons » who were rumoured to reside in its pastures.  The first successful ascension of the « roof of Europe » took place on the 8th and 9th of August, 1786, by Jacques Balmat and doctor Michel Paccard.  Successive ascensions, and a number of accidents, led to the creation of the Compagnie des Guides de Chamonix in 1823 and the PGHM (Peloton de Gendarmerie de Haute Montagne) in 1958.  It is estimated that between 25 000 and 30 000 people attempt to reach the summit each year, of whom 2000 - 3000 are successful. 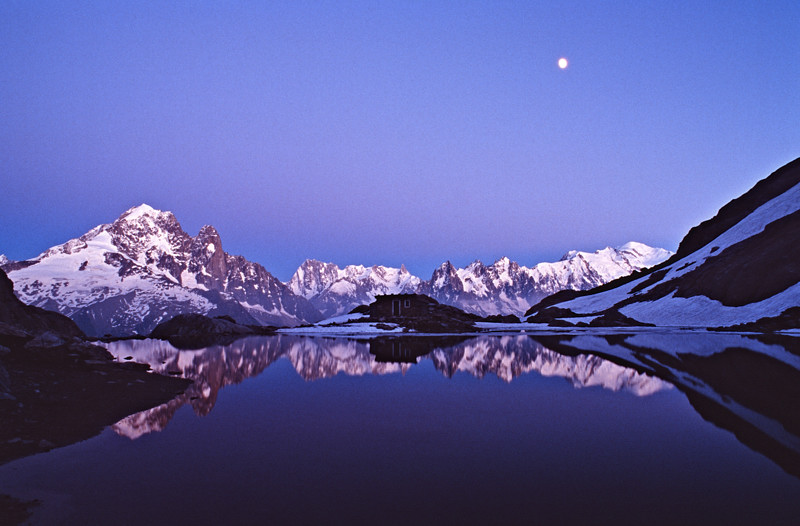 The most ambitious urban construction project by Vauban, a celebrated French military strategist who was also behind the transformation of Briançon into one of the most beautiful fortifications of the Alps, the Mont-Dauphin citadelle was built after Louis XIV requested a study by Vauban on the reinforcement of the Alpine frontier at the moment when the Duke of Savoie was attempting to penetrate the region.  In 1692, Vauban recommended a fortification of this natural acropolis at the junction of the Guil and the Durance, below Guillestre.  In 1700, he requested an extension of the compound and even the construction of a telescope looking over the Guil gorge.  This fortified city, baptised « Mont-Dauphin » was never populated, the project remaining incomplete despite the construction of wells, a powder magazine, and churches.

The highest auto pass in the Pyrenees, at 2115 metres, the Col du Tourmalet was historically a point of passage for shepherds, pilgrims and peddlers, before the inauguration of a « thermal route » in 1864 financed by Napoleon III. Like the Col du Galibier in the Alps, this « cursed detour » (signification of the name « Tourmalet ») became famous as a stage of the Tour de France.  Situated at the foot of the pic du Midi de Bigorre, (2877 metres) in winter it is the junction between the ski stations Mongie and Barèges, and is also the namesake of the largest skiable area in the French Pyrenees. 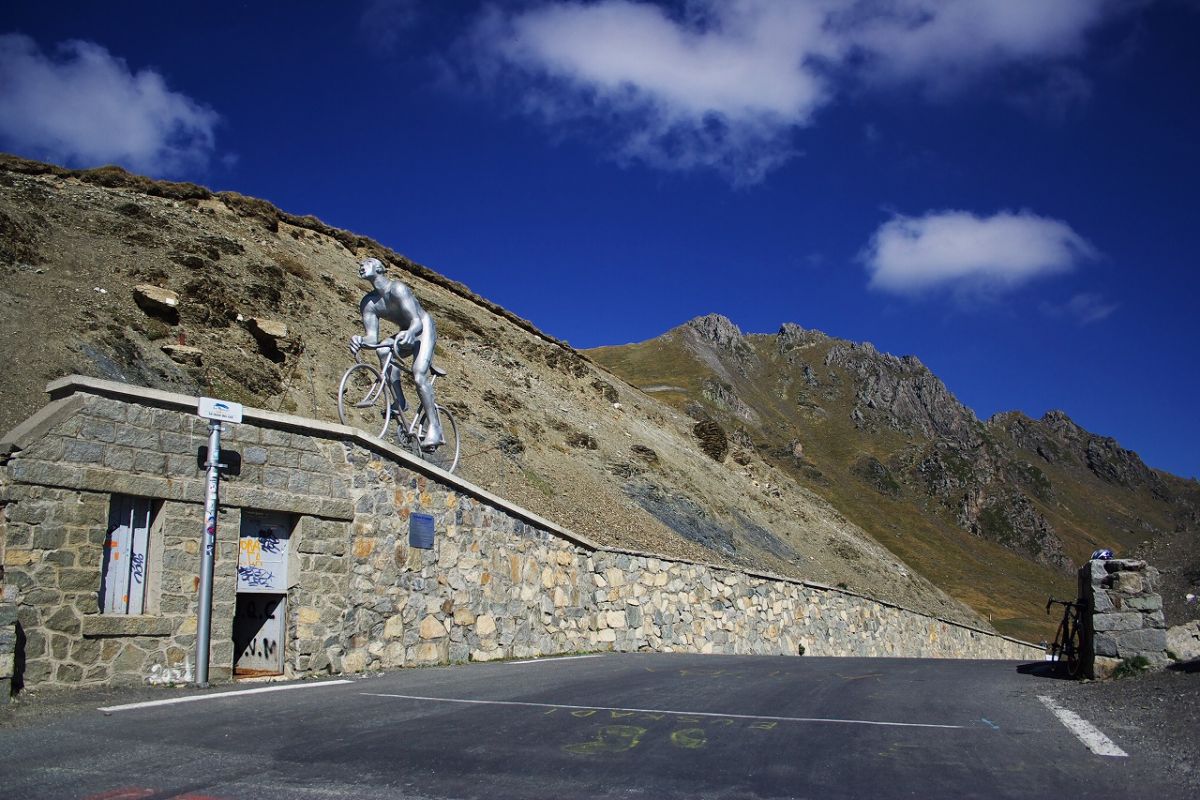 Dominated by Mont Bégo, at 2873 metres of altitude, this valley, situated in the Mercantour national park, is world renowned its vast collection of petroglyphs – over 100 000 - the largest in Western Europe.  Dating back to the Bronze Age (between 1800 and 1500 BC), the carvings represent simple geometric forms, animals, and tribal chiefs.  To prevent damage, the most important petroglyphs have been transported to Tende, to the Musée des Merveilles (Museum of Wonders) and replaced by castings.

This summit of the Ecrins massif (altitude 3982 metres), which lords over the village of Grave, is part of the history of mountaineering.  The conquest of its « Grand Pic » was once the object of a fierce competition, which went to an improbable team of climbers in 1877, led by an elderly mountain guide (Pierre Gaspard) and the young baron Emmanuel Boileau de Castelnau. Also a top destination for skiers, it is the namesake of the most prestigious off piste skiable domaine in France, the «Vallons de la Meije ».  An interesting anecdote: the summit faced the risk of literal decapitation in 1933, when a certain doctor Prompt proposed the construction of a tuberculosis clinic and observatory on the site.  Fortunately, the summit’s sharp, irregular shape made the installation of a chairlift to carry the patients and scientists to the top impossible! 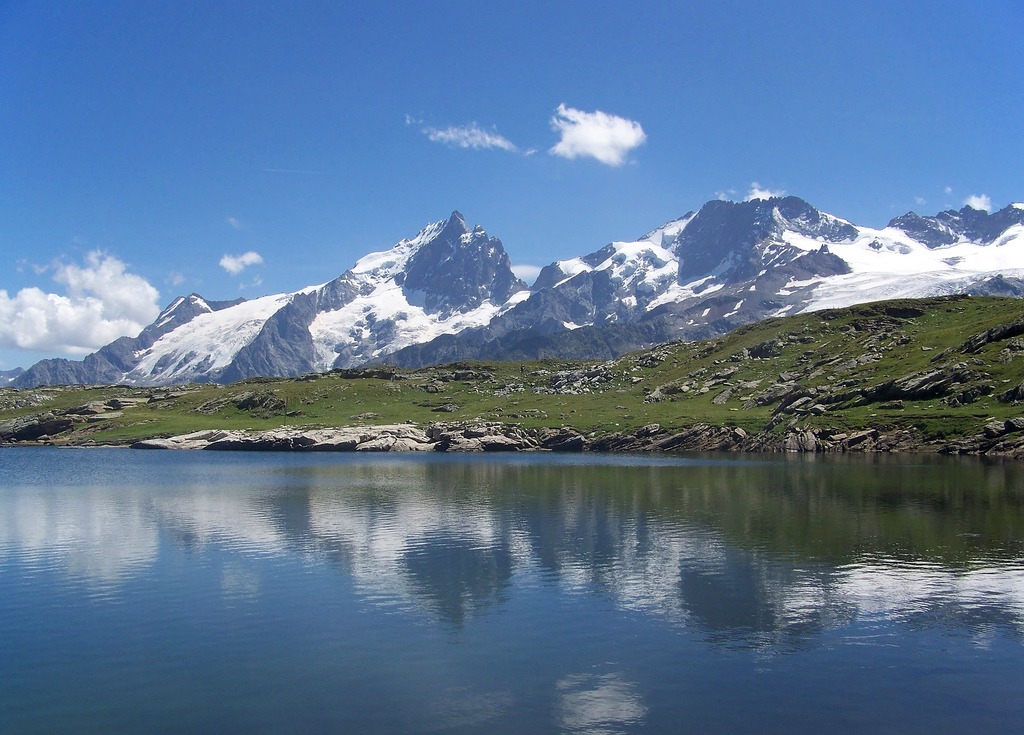