What if you were to use your next winter sports holiday as an opportunity to discover two activities that combine the joys of hiking with a bit of cardio exertion? Fatbiking and ski touring do just that, whilst providing great snowsports thrills. The latest on-trend alternatives to Alpine skiing!

Originally from the United States, fatbikes are mountain bikes with under-inflated, over-sized tyres (up to 5 inches) and rims, designed for riding on snow but adaptable to all terrain types. “The tyre-width makes riders feel safer. It creates plenty of grip, so you hardly ever come off the bike on a turn. As you move through the snow, there’s much less fear of falling off than on a classic mountain bike. Riding on compacted snow, like that of a footpath for example, is ideal”, explains Jérôme Casagrande, the MCF instructor who supervises fatbiking in Les Saisies. It’s also a well-established activity in Villard-de-Lans, Praz-de-Lys/Sommand and even Montgenèvre.

Mountain biking lovers will obviously fall for fatbiking, but so will anyone with endurance sports training. The level of effort required—and the itinerary profile—is roughly comparable to cross-country skiing. “Physically, it’s even more challenging than classic mountain biking,” explains Jérôme Casagrande, because of the large tyres (inflated to 500 grams in comparison to almost 2 bars on a classic mountain bike), fatbikes are slightly trickier to handle, not to mention the cold weather, which burns even more energy.

Some resorts, such as La Giettaz-en-Aravis in Les Portes du Mont-Blanc (Megève, Comboux, La Giettaz, Cordon) have adapted fatbiking for less sporty visitors by offering power-assisted fatbikes. Others, such as Le Grand Bornand and La Plagne, offer a “downhill-only” version after their Alpine ski slopes have closed to the public for the day; a slightly less daredevil alternative to snow mountain biking.

Fit climbing skins to your skis so that you can leave your tracks on untouched snowy slopes; that’s the principle of ski touring. This traditional discipline, which until now has been the sole preserve of experienced skiers, has really taken off in the last few years. Both for sporting reasons (it’s a high-fitness sport in an exceptional natural environment) and for those looking for new thrills (the freedom of discovering wide open spaces). If the great outdoors is calling to you but you’re hesitating over taking that next step, a number of resorts, such as Arêches-Beaufort, Chamrousse, Alpe-du-Grand-Serre, Méribel, La Rosière, Combloux, Serre-Chevalier and Peyragudes have offered permanent, designated, secure ski touring slopes for some time now. They’re generally to be found along the edge of the ski area. You climb up an existing track, which is always easier than having to trace one yourself, and all you need to get back down are some Alpine skis.

Please note that ski touring on ski areas is regulated. Find out what those regulations are to avoid any risk of collision between ski tourers climbing the slopes and skiers descending them. Night-time can be dangerous when the piste-bashers are in operation as their winch ropes present a real hazard to skiers.

To make ski touring even more attractive, some resorts had the idea of launching it as a guided night-time activity, which is now available in Val Thorens, Serre-Chevalier, Les 2 Alpes, Arêches-Beaufort, Val Cenis and Saint-Gervais. These sessions are lit by head torches and take place on designated runs where participants can enjoy the supervision of a high-mountain guide or ski instructor. They are often shorter in duration (maximum climb of 1hr-1hr 30mins) and include a sociable meal at a slopeside restaurant. They’re a good way to get more familiar with the basic ski touring technics (putting climbing skins on / taking them off, uphill kick turns, etc.) and trying out good quality equipment, as these sessions are often sponsored by ski touring or head torch manufacturing brands. 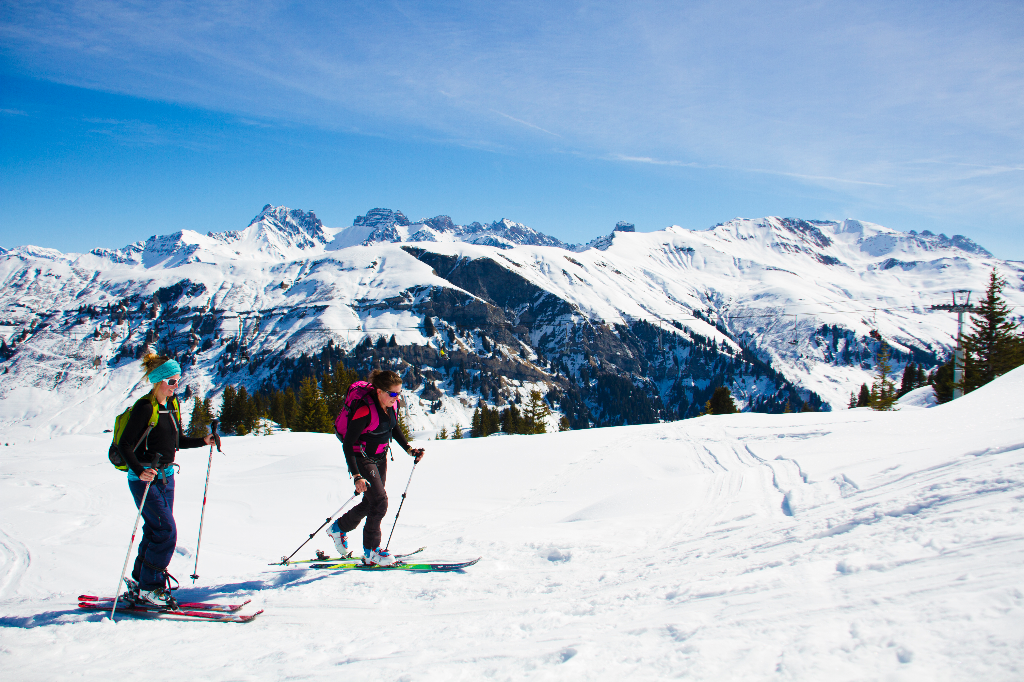