On your holiday, you can take advantage of a mountain of activities…or just relax, peacefully stretched out on your beach mat, on the grass, or on the sand.  Lakes and swimming spots are all around, and you can choose from a range of nautical activities to keep you entertained.  Quality and choice that rivals the Mediterranean !

Situated at 1500 metres of altitude, the waters of Lake Matemale are generally between 19° and 23° C.  Fully equipped beaches, some with diving boards, make it a favourite destination for kids.  You can also try a multitude of water sports including Optimist, 420, funboard, caravel and catamaran, as well as pedalo, canoe and kayak.

This favourite swimming spot situated at the heart of the village, facing Mont Blanc, offers more than just a breathtaking panorama.  It is also the first water recreation area in France with an environmentally friendly certification.  Here, no need for salt or chlorine, the 1500 square metres of water are naturally filtered by over 10 000 aquatic plants, while the water is warmed by the rays of the sun, to a temperature of 19°C to 26°C.  Access is limited to 700 entries per day in order to permit the plants to do their work.  Entry costs 4.60 euros per adult ; 3.60 euros per child  (5-16 years). 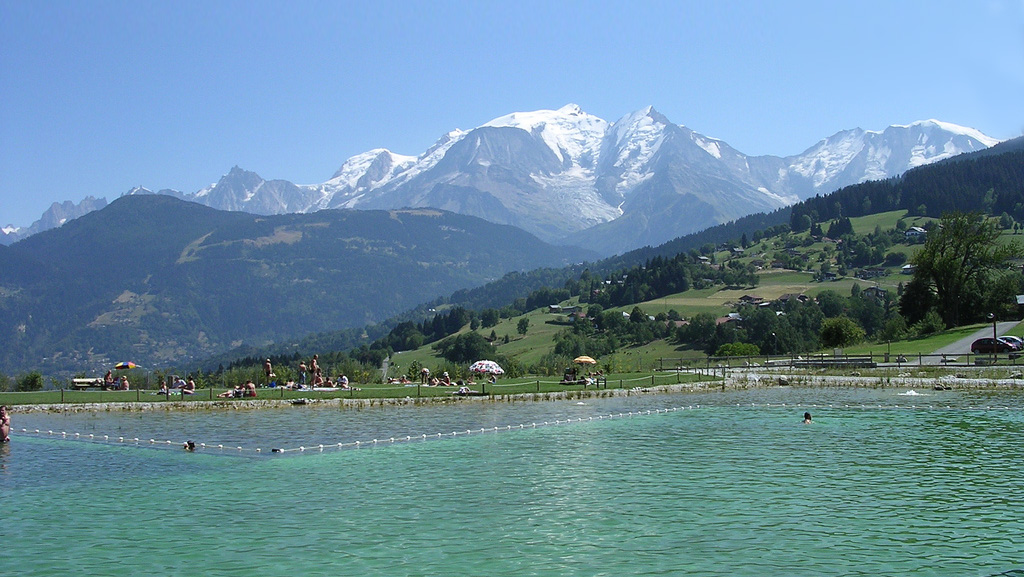 The largest water reservoir in France (and second largest in Europe) with 1.2 billion cubic metres of water, Lake Serre-Ponçon, at 780 metres of altitude, is fed by the Durance and Ubaye rivers.  Note that Electricité de France holds to ensuring that the lake is optimally filled at the beginning of the summer season, while making use of the waterways.  The small chapel Saint-Michel, dating back to the 12th century (destroyed in 1692 but reconstructed soon after) crowns a small island in the middle of the lake, a gem for photographers.  At Serre-Ponçon you can practice all the nautical sports imaginable : windsurfing, kitesurfing, waterskiing, tubing, wakeboarding, sailing, motorboating, and more. 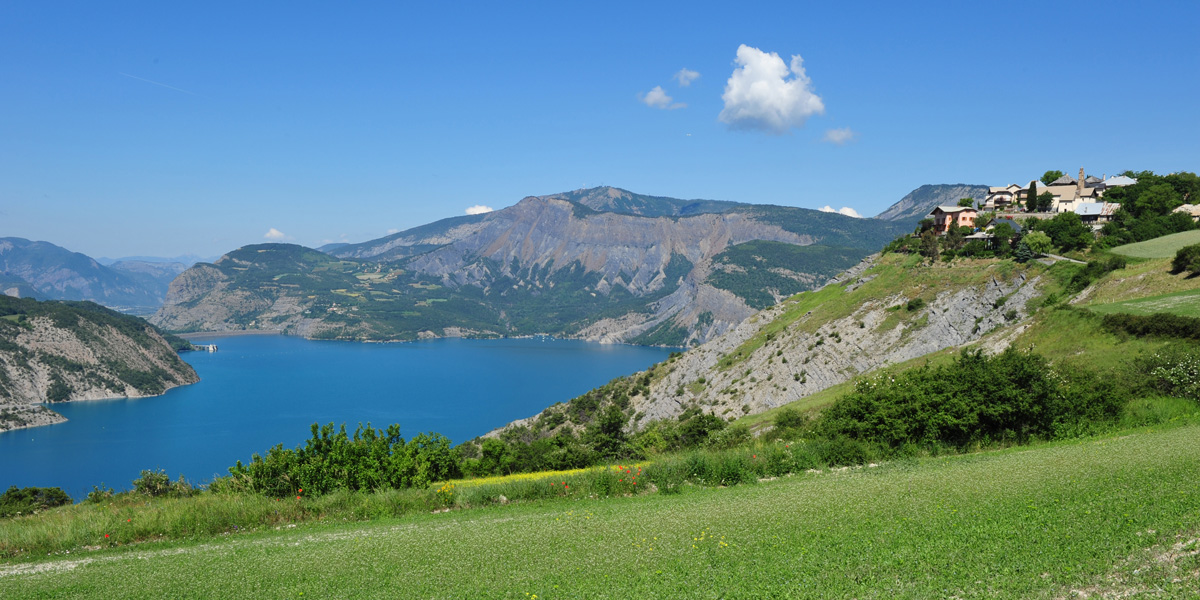 Tucked away beneath the village, near the Arrondine river, this water recreation area bordered by trees appears almost to be a natural mountain lake.  You will love the grassy beaches, the picnic area with rustic furnishings, the bars with terraces, and the kids play area situated nearby.  The swimming area is supervised from 12:00 – 18:00.  Parking costs two euros, access to the water recreation area is free of charge.

Situated at 660 metres of altitude, this 2200 metre long, 760 metre wide lake (115 hectares) is the largest of the region.  A fisherman’s paradise, it is home to rare species such as freshwater monkfish and quillwort.  The swimming area is supervised from May until September.  You can also enjoy boarding and sailing sports, not to mention rowing, canoeing, kayaking and pedalo, electric dinghies, and diving.  Take a tour around the lake in a speedboat or on foot, on the 6 km trail. 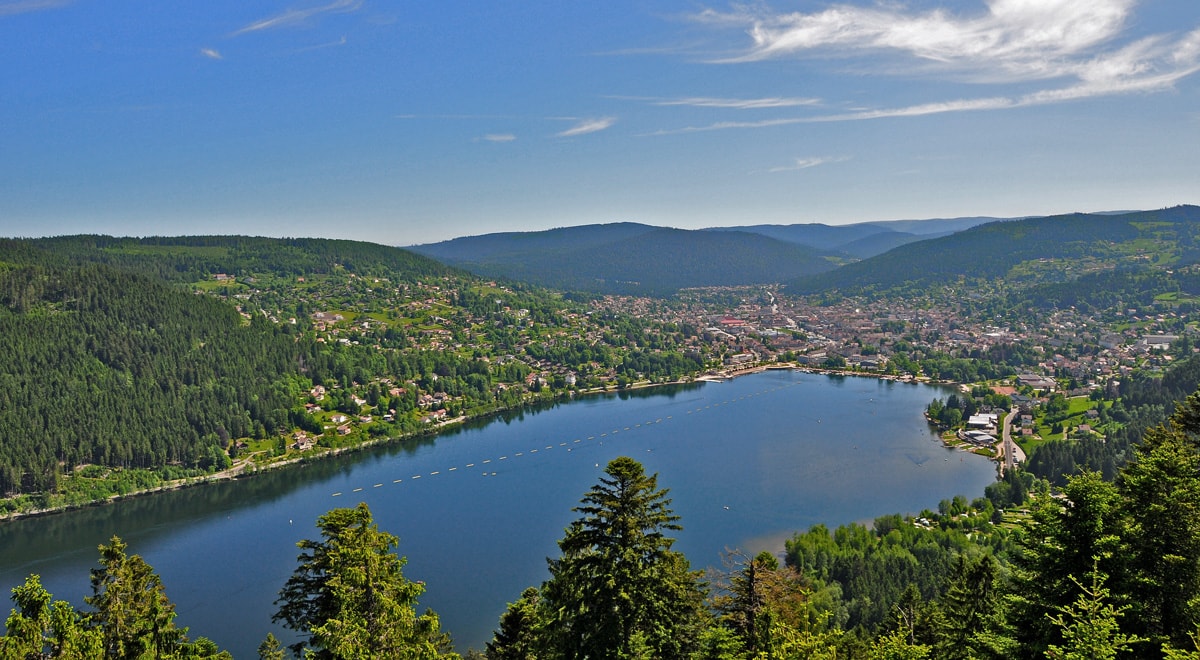 Smaller than its Savoyard brothers, the lakes Bourget and Annecy, Lake Aiguebelette, at 545 hectares, nevertheless offers some real advantages.  At an altitude of 360 metres, at the foot of the Epine mountain, near the Parc naturel régional de Chartreuse, it is « an emerald gemstone set in a ring of mountains, » in the words of the author Henry Bordeaux.  Swimmers appreciate this lake for its tranquility – motorboats are not permitted – and its warm waters, which reach temperatures of up to 28°C.  Fishermen delight in its stock, and athletes can benefit from its international rowing centre, which will host the world championships in 2015.

35 kilometres long, Lake de Vouglans is the third largest man-made lake in France.  Its panoramic viewpoints, sandy beaches and hiking trails offer the possibility to admire the brilliant turquoise of the water.  In certain areas, the banks have been built up into marvelous, sandy beaches where the water temperature can go up to 24° in the summer.  Three marinas and different tourist accommodation zones (campgrounds, holiday villages, leisure centres) have given the lake the ambiance of a seaside resort.  Choose among numerous activities including swimming, boating, sailing, waterskiing, fishing, horseback riding, climbing, canoe-kayak, pedalo, hiking, mountain biking, jet ski, and rowing. 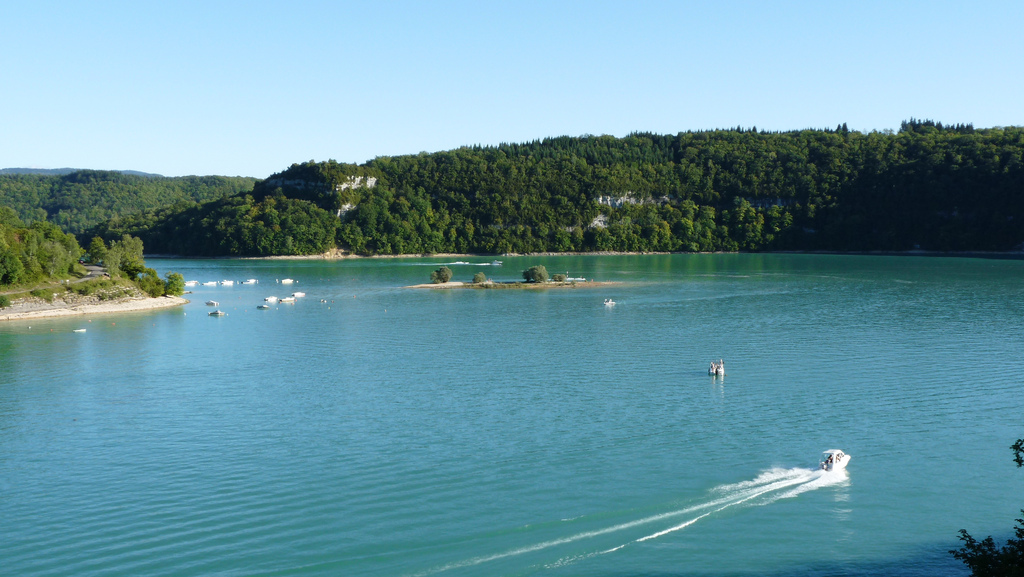 14,6 km long and between 800 and 3350 metres wide, with a perimetre of 38 km, Lake Annecy, at an altitude of 446 metres, is the second largest glacier-fed lake in France, after Lake Bourget.  It is reputed to be one of the cleanest in the world, thanks to the construction of 66 water treatment stations and 6 depollution stations at the end of the 1950’s.  It is the principal source of drinking water for the city of Annecy.  The average temperature in July is 22°C, and the lake counts no less than 12 maintained beaches.  You can enjoy traditional water sports such as sailing, waterskiing, pedalo, kayak, etc., as well as the more inventive stand-up paddleboard, which consists of paddling upright on a surfboard ! 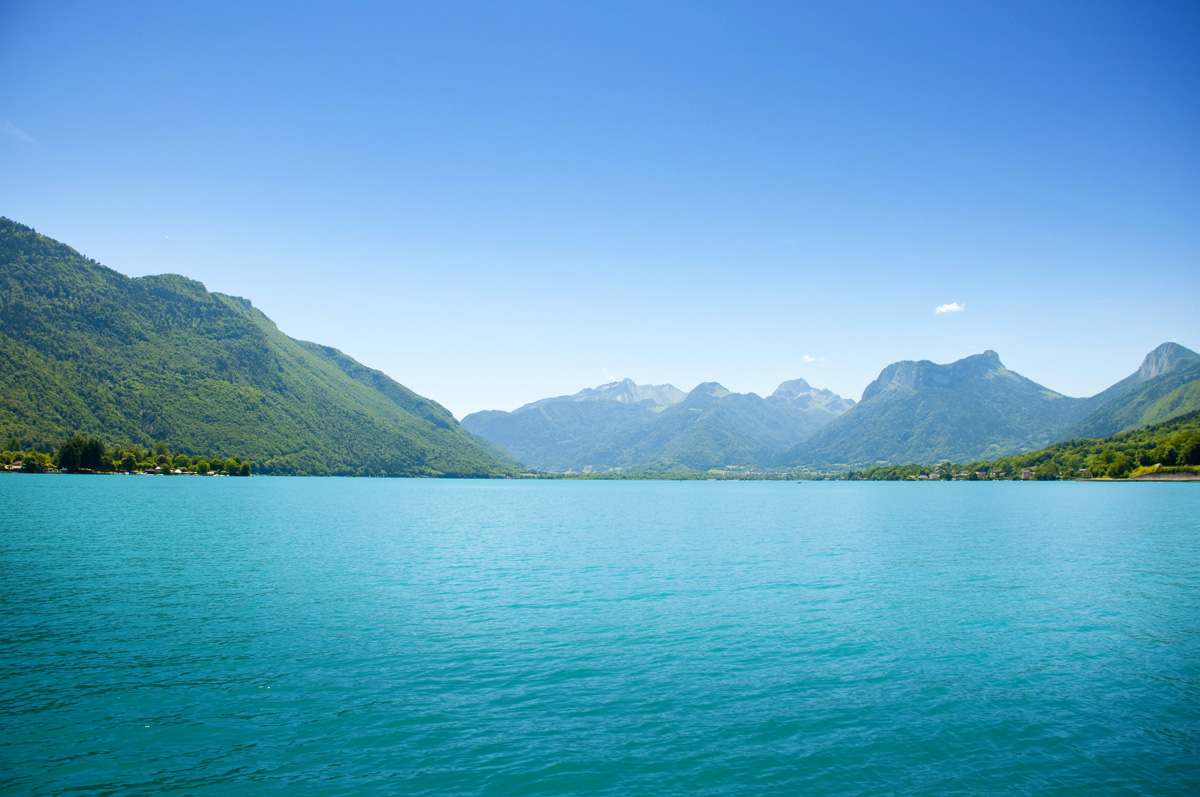 In the heart of the Val de l’Orbe, at an altitude of 1059 metres, this 97 hectare water recreation area is one of the highest in the French Jura.  The diverse culture of this lake-dwelling region is visible not only above, but also below the surface of the lake, where trout, pike, perch, tench, roach, whitefish, and chub make their homes.  In 2009, important work was done to improve the tourist infrastructure : swimming area and nautical activities, outdoor showers, grassy terraces and a bowling pitch. 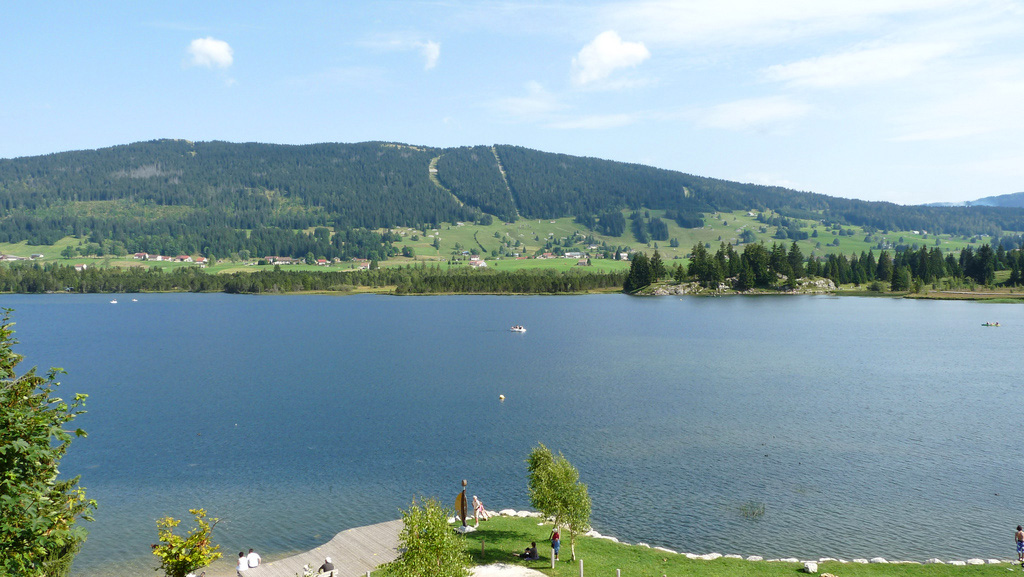 According to local legend, this lake was created by the tears of an angel who was ordered by God to leave the Northern Alps.  From a more scientific perspective, it finds its origins in the glaciers.  The formation of the lake was the result of the force of the contact between two glaciers, the Rhône and the Isère, which carved the Bourget valley, filling with water after the last glaciation, around 19 000 years ago.  It is the largest natural lake in France : 18 km long, between 1.6 and 3.5 kilometres wide, with an average depth of 85 metres (maximum 145 metres).  Situated at an altitude of 240 metres, the average temperature of the lake is 23°C in July, and can go up to 26°C.  The lake holds the label « France Station nautique » (French nautical station) an organisation overseeing accommodation and leisure facilities.  Numerous nautical activities can be practiced, including sail sports (16 marinas border the lake) rowing, canoe-kayak, fishing, diving, waterskiing, wakeboarding, and windsurfing. 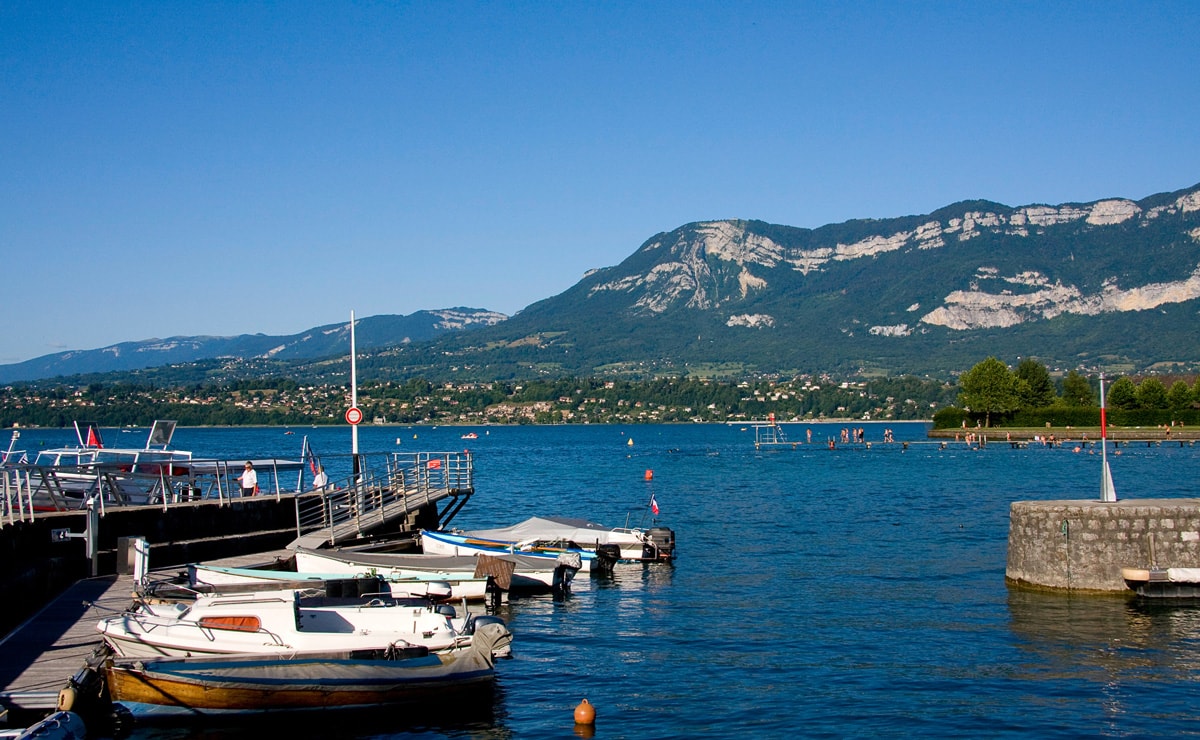 At an altitude of 500 metres, at the doorway of the Trièves only 25 kilometres from Grenoble, Lake Monteynard is LE spot in Isère for wind and kitesurfing.  Overlooked by Sénépy mountain, il was created as a result of the construction of a dam by Electricité de France in 1962.  The turquoise waters extend over 20 km. Here you can also practice catamaran, canoe-kayak, waterskiing and wakeboarding.  Contemplative souls can enjoy a cruise on the lake.  Children will love the nautical base at Treffort, where they can cool off in a supervised skating rink or on the waterslide.

At Sallanches, vacationers can enjoy no less than three lakes.  Each lake is adapted to particular activities. The first, 242 metres long, is reserved for fishing, and the catch can include wild and rainbow trout, carp, pike, roach, tench,chub, crayfish, and frogs.  The second, 450 metres long, is for swimmers, and is supervised from 12:30 until 18:30 in July and August.  Outdoor showers, bowling and volleyball courts, fitness circuit, and picnic and barbeque areas allow you to vary your pleasures.  The third lake, 515 metres long, is dedicated to windsurfers, who will be delighted by some of the best conditions for this sport in Haute-Savoie.

The centre for leisure activities in Pontet, this lake is doted with 500 square metres of supervised swimming area, in a protected setting spanning over 30 hectares.  Feel the sun’s rays while you lie on the beach or on the lawn.  When you feel like moving, you can rent rowboats or pedalos, or you can test the multiple activities at the park, such as the trampoline, acrobatic circuit, mini golf, inflatable structures for kids, and more.  Entry 2.50 euros, 2 euros after 15:00.

Situated at 2.5 kilometres from the village of Bessans, this leisure zone is composed of two lakes : one reserved for fishing, the other, which is supervised in July and August from 11:30 until 17:30, for swimming.  Initiation courses for kayaking are also available.  Visitors can take advantage of the picnic area.

Lake Paladru, nicknamed « Blue Lake » thanks to its beautiful colour, is situated at 500 metres of altitude, at the foot of the hills of Voiron, near the Parc Naturel régional de Chartreuse.  Formed by a glacier, it is the 5th largest natural lake of France, at 5.3 km long and 950 metres wide, with a surface area  of 3.9 km2.  Its average temperature is 25°C in summer, ideal for swimming, with 6 supervised beaches.  One can also enjoy sailing sports (many sailing schools dot the perimeter of the lake) or try board sports and rowing.