The autumn rains have begun in the mountains…and it is the opportunity for celebration! The cool, humid weather provides perfect growing conditions for berries and mushrooms.The secret to a good harvest?  Knowing the right locations, of course, but also being able to identify each species, particularly when it comes to mushrooms.  In case of doubt, ask a pharmacist - most of them know and can identify which species are safe to eat.

The autumn rains have begun in the mountains…and it is the opportunity for celebration! The cool, humid weather provides perfect growing conditions for berries and mushrooms.The secret to a good harvest?  Knowing the right locations, of course, but also being able to identify each species, particularly when it comes to mushrooms.  In case of doubt, ask a pharmacist - most of them know and can identify which species are safe to eat.

This berry, belonging to the genus Vaccinium, prefers acidic, well-drained soil.  It is often found in areas which have been burnt by forest fires, generally over 1500 metres of altitude in the south of France, but as low as 800 metres in the Vosges.  Blueberries growing at the edges of streams are often plumper and fleshier.  Blueberries can be enjoyed in many different ways.  They are delicious eaten fresh, baked in pies, tarts or muffins, or can also be used to make jam, syrups, sorbets, herbal teas, liqueurs, and wines.  Note that the blueberry harvest is regulated - for example, in the Parc Naturel Régional du Ballon des Vosges, you are limited to 2 kilos per person per day - and the use of a blueberry rake may be prohibited.

This fruit, which, like raspberries, grows on thorny bushes, is a blue-black colour and is ripe for picking in September.  It can be consumed fresh or used in jams, jellies, syrups, sorbets, and various desserts.  The leaves can also be dried and made into tea to treat ear, nose and throat inflammation and mild diarrhoea, as well as to detoxify the kidneys.

Blackthorn is a small wild fruit, approximately 1.5 centimetres in diameter, of a dark blue colour ripening to shiny black.  The fruit has a pronounced acidic, astringent taste, but becomes sweeter after the first frosts.  Note that the blackthorn tree, which can grow up to 6 metres, can resist temperatures as low as  -30 ° C.  Blackthorn can be made into jelly, but is more often used for wine, eau-de-vie or liqueurs such as the Basque specialty Patxaran.

These small red berries are found between 300 and 3000 metres of altitude, in clearings, peat bogs and mountain pastures.  Common in the Alps and in the Jura, they are rarer in the Vosges, Pyrenees and in the Massif Central.  Lingonberries are quite sour, but this quality diminishes after the frost or when they are frozen.  They can be enjoyed on their own or in a fruit salad.  They can also be used to make jams or jellies, alone or with other berries, or as a sauce to accompany game meats.  They are also used as a base for alcoholic beverages.

These red berries (or black, in the case of a neighbouring species) grow on leafy shrubs with white flowers, from 15 to 30 centimetres in height.  Common in the Southern Alps, notably between 1000 and 1800 metres of altitude in Scots Pine forests, they resemble the lingonberry in appearance.  The berries are edible but very bland.  The leaves, however, are useful for medicinal purposes.  Excellent for the elimination of urea, the plant is an effective antiseptic for the urinary and intestinal tracts, thanks to its arbutin-rich leaves.

The Trumpet of Death

The trumpet of death (Craterellus cornucopioides) is also known as the black chanterelle.  It is found in hardwood forests and coniferous forests, growing well near beech, hazel and oak trees.  It prefers chalky soil or clay.  Very abundant after heavy rains, it can be cooked fresh or dried and conserved in a dry place.  Particularly flavourful in sauces, mixed with garlic and cream, it is the ideal accompaniment for white meats.

Also known as the porcino, the cep comes in many varieties, the most famous being Cèpes de Bordeaux.  In the mountains, one of the most common varieties is the Boletus pinophilus, a cèpe des pins associated with coniferous trees, particularly Scots Pine, or with high-altitude, broad-leaved trees.  The cap is red-brown and relatively unremarkable.  The stalk is more or less the same colour, a bit paler.  Enthusiasts say it is the finest of the ceps thanks to its firm, compact flesh.  In general, ceps can be harvested at the end of the summer, ideally ten days after a heavy rain.

The Parasol mushroom (Macrolepiota procera) can be identified by its cap, 10 to 30 centimetres in diameter, egg-shaped, convex and spreading into a parasol shape, crowned by a teat; and by its stipe, 15 to 40 centimetres high, hollow, brown and fibrous, bulbous and of a rough texture at the base.  The flesh is soft and white, with a pleasant, fruity flavour and aroma.  It is found mainly in undergrowth and in clearings, among bracken and broom, preferring silicious soil.  The stipe can be finely chopped and used in sauces and soups.  But parasol mushrooms are valued mainly for the caps, which are best eaten young, before the appearance of brown gills.  They can be eaten raw, to accompany a green salad.  To cook, pan fry whole caps for a few minutes in olive oil, or, better, grill them on the barbecue and season with salt and pepper before serving.

Also known as the girolle, the chanterelle (Cantharellus cibarius) can be identified by its funnel-shaped cap, ranging in colour from pale yellow to orange, 4 to 10 centimetres in diameter.  It grows near broad-leaved and resinous trees, until the end of the fall, but disappears with the first frosts.  Its firm flesh remains crisp and flavourful after cooking, during which it emits a fruity aroma, often compared to that of the mirabelle plum.  It can be diced into small cubes and fried in butter or oil to accompany an omelette.   In more elaborate forms, the chanterelle can accompany meat or fish, or be used in the preparation of savoury pies.

What to do in case of intoxication

Never attempt to treat yourself.  Call a poison control centre or the nearest doctor.  In case of serious illness, dial 15 for an ambulance.  Do not allow the patient to drink anything, including water.   Reassure the patient by speaking calmly, place him on his side and cover with a blanket while awaiting assistance.  If possible, conserve remaining or regurgitated foodstuffs, which may be useful in identifying the toxin. 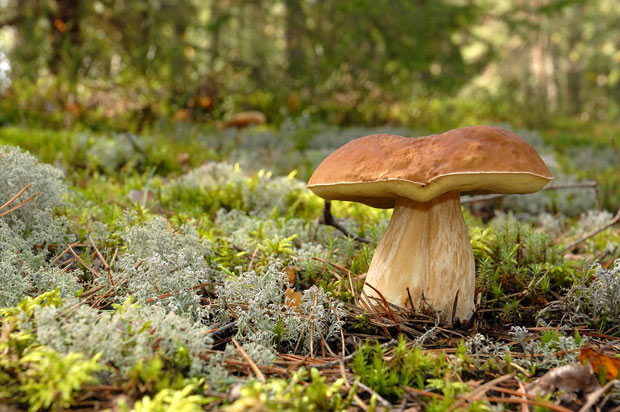