The altitude spas in France are thriving -and for good reason, as they bring a real sense of well-being to young and old after a day spent in the cold. Here is a selection of these cocoons nestled in the French mountains, with new establishments and new treatments.

The Kaïla Spa in Méribel

The altitude spas in France are thriving -and for good reason, as they bring a real sense of well-being to young and old after a day spent in the cold. Here is a selection of these cocoons nestled in the French mountains, with new establishments and new treatments.

The Kaïla Spa in Méribel

A new relaxation temple has arrived for this winter in the most recent luxury hotel in Méribel, the Kaïla.This hotel, inaugurated in December 2012 - is the first five-star hotel in the 3 Vallées resort.The family-group owners have created a 500 m² spa, on two levels, witha swimming pool featuring an aquamarine course, counter-current swimming and water geysers…The Kaïla is partnered by the Nuxe brand for the treatment area, with six cabins, two of which are for dual massages.A good way to spend time chatting to your best friend or companion!

The first spa in Méribel-Mottaret

The Alpen Ruitor, which was the first hotel created in the Méribel-Mottaret resort in 1978, has been renovated this winter, gaining its fourth star.The hotel - owned by the Fenestraz family - has also taken the opportunity to create a spa, the first in this quarter of the 3 Vallées resort, witha sensorial, relaxing or invigorating shower, Jacuzzi, sauna, steam room, plus two treatment cabins, in partnership with the Anne Sémonin brand.This stylish brand, which has pioneered natural, personalised treatments, has developed a special skier’s formula for the Alpen Ruitor, with a hydrating face treatment, followed by a resourcing massage to boost organisms after a long day's skiing in the fresh air! 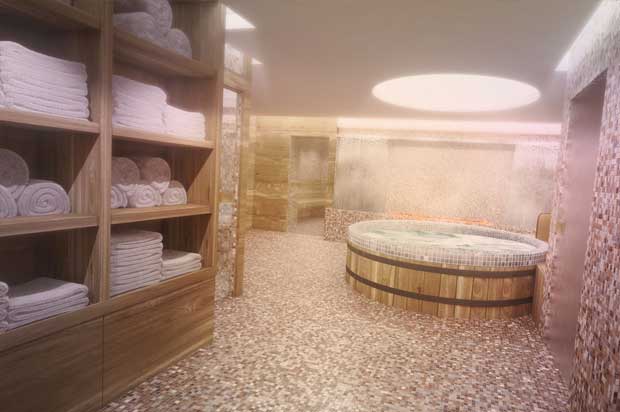 This new well-being chalet has just opened in the Massif Central resort on the road leading to the main Spa.Decorated with wood panelling, Escapade Beauté offers a steam room, solarium and treatment rooms in partnership with the Payot brand.Amongst the specialities offered by Angèle, the owner, you will find a relaxing Hawaiian massage – the Lomi Lomi - which is carried out using wrists and forearms.   The beautician also offers an evening package, including a facial treatment, makeup and nail polish, to light up the dance floor after having shone on the snowy slopes!

This is the first winter for Lucie Bertrank who opened her massage centre last spring in the heart of the medieval town of Besse, close to the Super-Besse resort.You will find a specialised side-lying massage, which is carried out in the foetal position, and enables a real relaxation.It is one of the rare massages that pregnant women can experience. In her full range of treatments, you can also have a sporty massage, aimed at skiers, for relaxation and comfort for tired muscles after skiing.

Relax under the thermal spring water at Balnéa

After opening a Japanese area last winter to add to its world baths (American Indian, Roman, Tibetan), Balnéa, close to Peyragudes, has innovated again with surprising underwater relaxation sessions.Equipped with a snorkel whose mouthpiece includes electronic sensors to transmit sound through your teeth, instead of your ears, bathers go under the water.There by miracle they hear the soft music of the Big Blue film!After a musical ‘journey with the dolphins’, relaxation is guaranteed.

The altitude spa, O des Cimes - established in 21 of the 25 CGH hotels and residences, including the new residences at La Rosière and Châtel - is partnered by two cosmetics giants, Decléor and Carita.  The Shiseido group brands have developed exclusive treatment programmes, based on the time you wish to spend on well-being during your holidays (30, 40 or 60 minutes).The Alpine spa also continues to work with ski champions to create revitalising treatments for the more sporty.After the Olympic champion, Antoine Dénériaz, last year with a ritual for men, it is the turn of former slalom champion, Annie Famose, with a treatment for ladies.Because 60% of CGH’s clientele is families, the spas have also increased their services for children, with a new “P‘tit champions” card and a new trappers’ cabin concept just for them.The first one has been installed for this winter in the spa in the new CGH residence in Châtel, Les Chalets d’Angèle, and will then be duplicated in the other group’s hotels.

This is the first winter for the brand new spa in the Radiana hotel, in the thermal resort of La Léchère, at the foot of Valmorel.This 1500 m² hotel spa is fed by thermal water.Particularly rich in magnesium, calcium and oligo-elements, this water – tapped from a depth of more than 200m - has been recognised as beneficial for the circulation and flexibility.It also has relaxing and de-stressing properties - perfect after an exhausting day!The centre includes a fun aquatic area with four pools, relaxing showers, two steam rooms and saunas, four treatment rooms, including two for two people, an outside Jacuzzi and clay wrapping cabins…As an ecological bonus, the centre is heated by geothermal energy, using the thermal water whose temperature exceeds 60°C!

The Val Thorens**** - the emblematic hotel in the highest resort in Europe - has been completely renovated for the new season.The spa features one of the largest indoor swimming pools in the resort, a sauna and a steam room, for the exclusive use of hotel residents.However, three treatment rooms are open to outside clients. In association with Thémaé, the treatments and massages have been created around tea, with rituals inspired by the tradition of Japanese tea masters and masseurs from Kerala, in the South West of India.