There’s always something fun and exciting going on in the French mountains and the new winter season 2011/12 is no exception. The Ski France resorts show yet again that when it comes to winter holidays, there are is a huge selection of great cultural events, parties and festivals for everyone. And that’s even before we think about sporting occasions both grand and humble, which take centre stage as usual this season.

Here is our pick of the season’s must-see events.

There’s always something fun and exciting going on in the French mountains and the new winter season 2011/12 is no exception. The Ski France resorts show yet again that when it comes to winter holidays, there are is a huge selection of great cultural events, parties and festivals for everyone. And that’s even before we think about sporting occasions both grand and humble, which take centre stage as usual this season.

Here is our pick of the season’s must-see events.

Now in its third year, this festival for movie-lovers turn its projectors to Italy, with the actor and director Michele Placido taking his place as head of the prize jury. Around 60 films are in competition and will be projected in Les Arcs and Bourg St Maurice. www.lesarcs-filmfest.com

The Andros Trophy, France’s most prestigious ice-racing series, stages one of its races of the season at the French ski resort of Alpe d’Huez. Attracting big name drivers and manufacturers, it is made up of seven races in mountain resorts. Variable weather conditions make for exciting viewing when ice melts or forms. www.tropheeandros.com

The now famous annual Valloire sculpture festival will this year see dozens of sculptors, both professional and amateur, gathered to deliver their work inspired by traditional Canadian art. Art lovers of all ages will watch agog as stunning ephemeral creations take shape before their eyes, only to slowly disappear under the sun’s rays. Beautiful and poetic!

Courchevel: Contemporary art at the summit

Following the monumental Dali sculptures in 2010 and Rodin, Folon and De Luigi in 2011, Courchevel and the Bartoux gallery turns its attention to the best young artists this year, with contemporary art installations dotted around the resort.

The squeezebox is the star for a week in Termignon when a fabulous atmosphere spreads through the town thanks to jazz evenings, classical concerts, and musette soirées. To celebrate its tenth anniversary, the festival will be looking back at previous years’ highlights and also hosting a musical composition competition.

The resorts of Megève, Courchevel and Val d’Isère open their arms to four-legged friends every year for the Polo Master series – polo on snow. It’s a more natural sport than you might imagine – in Megève in particular, there is a strong equestrian tradition. www.polo-master.com 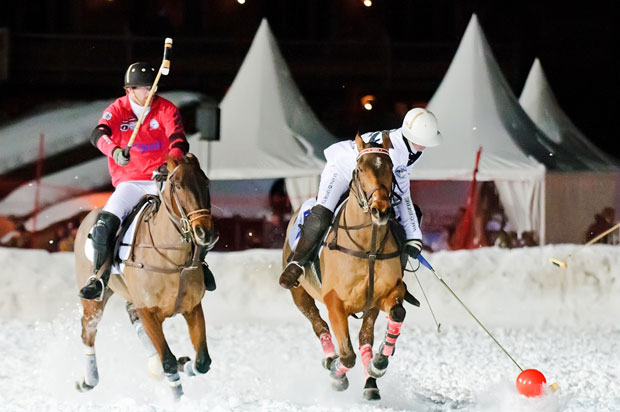 Wind the kids or grandkids up into a festive frenzy by taking them to the annual week long Santa Claus Pestacles (as local children call it) in the Aravis resort of La Clusaz. Entertainment on offer includes a circus, brass band, workshops. It all kicks off with Father Christmas’s arrival followed by downhill skiing with torches, fireworks and warm chocolate. www.laclusaz.com

The second outing for the free rock festival takes place at the foot of the slopes. The twist is that the exact location of the show is not known until the artists receive a SMS message telling them where to meet a couple of hours before the show. www.rockthepistes.com

The world’s toughest husky sled race takes place on the mountain, where they navigate some 25,000 metres – the equivalent of seven times the climb from Chamonix to Mont Blanc. More than 70,000 spectators attend each year, the event being declared the second most important sporting event in the Alps by the esteemed sporting magazine L’Equipe. www.grandodyssee.com

A major coup for Le Grand Bornand sees the first ever French hosting of the biathlon world championship in the Sylvie Becaert stadium, which opened last year. Local biathletes shone at Vancouver and caused an explosion in interest in the sport in the area, so their participation is hotly anticipated.

Created by Canal+Events and ESPN, this is a rendez-vous of the freestlye snow sports world is expected to see the French stars shine, not least two-times gold medallist in halfpipe, Kevin Rolland. This promises to be a major spectacle with over 70,000 fans in attendance.

OK, so it’s fairly unlikely that too many of you will be entering the 27th annual Pierra Menta alpine ski endurance race in 2012, but what a spectacle for visitors! Spectators arive by foot, ski or snowshoe to cheer 200 brave teams – with members roped together – as they climb over 32,000 feet, cross 15 passes and hike to up to six hours a day. Bon courage! www.pierramenta.com 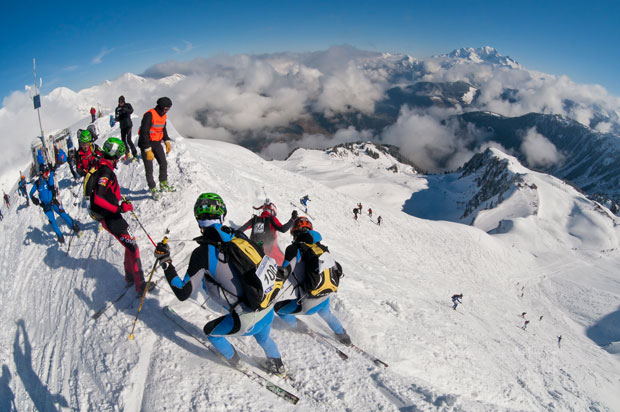 For four days, the sound of chisels, scissors and other woodcutting implements will echo around Auron as the first artistic festival dedicated to wood takes place. Five artists will create work live.

For three years now, the resort has kicked off its ski season with a spectacular concert. This year, centre stage will be Goran Bregovic and the Orchestra of Birth and Funerals - a perfect excuse to dance and party!

Those of us for whom the adrenaline rush of snowboarding and speedy skiing is alien, should get some inspiration and courage from the incredible films displayed at the annual Freeride Film Festival in St Lary, Pyrénées. www.festival-freeride.com

Calling all lonelyhearts – love in his the high altitude air! If you’re looking for romance, why not head to the Pyrenean resort of Grand Tourmalet to find your soul mate at the annual snowdating event.

Descend from the Pic de Piau down to the resort by any means necessary as quickly as posisble - that’s the key to winning this hugely enjoyable race in Piau. A sense of humour is a must!

The 7th edition of the fantasy art fair takes place in the stunning vaults of Mont-Dore’s historic thermal spa. Expect to see some mind-bending works of surrealism.

This small Jura resort welcomes Europe’s finest alpine skiers for the second time, in the hope that it wil one day welcome the elite athletes of the world scene in the future.

Take in the spectacular mountain views from the privileged position of a hot air balloon (called a montgolfière in France for obvious reasons).

This article first appeared on FrenchEntrée.com