After following the exploits of the Tour de France riders, thousands of amateur cyclists are inspired to climb the legendary slopes.  Cyclo-sport events – races that are open to all, with semi-professionals riding alongside Sunday cyclists - are now widespread. Here is just a small selection, which also allow you to take in the scenery!<:strong>

The Vercors Ladies Challenge (25th May)

After following the exploits of the Tour de France riders, thousands of amateur cyclists are inspired to climb the legendary slopes.  Cyclo-sport events – races that are open to all, with semi-professionals riding alongside Sunday cyclists - are now widespread. Here is just a small selection, which also allow you to take in the scenery!<:strong>

The Vercors Ladies Challenge (25th May)

The first edition of this cyclo-sport event, exclusively for women, counts towards the Grand Trophée (a circuit bringing together some of the most prestigious French cyclo-sport events, including the Marmotte, the Granfondo Golfe de Saint-Tropez and the 3 Ballons). Departing and arriving in Lans-en-Vercors, during this 115 km loop with 2050 m vertical gain, you can admire the diversity of the landscapes in the Vercors massif, from the Cols de la Croix Perrin, de Proncel and de Saint-Alexis, to the magnificent gorges of La Bourne. The event is also aimed at less athletic cyclists with its touring option of 42 km and 600 m vertical gain, letting you visit the four Challenge partner towns (Lans, Autrans, Méaudre and Villard-de-Lans). The major challenge is the climb to the Col de la Croix-Perrin. This touring event also takes place the following day (26th May) for the Challenge Vercors participants (men and women). More athletic cyclists can attempt the “senior” (126 km, 2300 m vertical gain) or “master” (177 km, 3650 m vertical gain) courses.

Like the Vercors Challenge, this cyclo-sport event leaving from the thermal resort of Luxeuil-les-Bains and arriving at Raddon-et-Chappendu (Haute-Saône), counts for the Grand Trophée. It takes you to the heart of the Ballons des Vosges Natural Park. The Master course, with 213 km and 4300 m vertical gain includes ascents of the Ballon d’Alsace, Grand Ballon - by the “royal road” of the Col Amic - and the Cols d’Oderen, des Chevrères (nicknamed the “small Galibier” with 15% climbs in places) and des Croix - the latter located in the “country of 1000 lakes”, similar to Finland. The Senior course takes place over 105 km with 2100 m vertical gain, with climbs to the Col des Chevrères and the Ballon de Servance, returning via the “country of 1000 lakes”. Less athletic cyclists can take part in the Grimpée du Coeur (Heart Climb) between Luxeuil-les-Bains and the Mont du Tronc, over a 16.27 km course with 4.8% average climb (10% climb in places).

This new event, at the border between the Alpes de Haute Provence and Alpes-Maritimes departments, offers a 120 km course with 4000 m vertical drop, with the finish line in the resort of Pra-Loup. Before arriving, riders will have climbed three cols situated above 2000 m high - Col d’Allos (2247 m, 21 km climb at 5.5% average), the col des Champs from the fortified town of Colmars (2087 m, 12 km ascent at 7%), and the col de la Cayolle (2326 m, 20.6 km climb at 6.3%). During this final climb, you will pass the village of Estenc at 1790 m, source of the Var River. Interestingly, the Var is the only French river that does not go through the department named after it, as it only flows through the Alpes-Maritimes. The final climb to Pra-Loup will remind Tour de France experts of a famous incident in 1975 where Eddy Merckx, wearing the yellow jersey and only 4 km from the finish line, weakened and was overtaken by Felice Gimondi and Bernard Thévenet - who won the stage and the yellow jersey, and ultimately the Tour de France.

The Marmot (6th July) The oldest French cyclo-sport event (created in 1982) attracts more than 7000 participants from nearly 40 countries (the French represent only 20% of the riders). You will find 174 km with 5000 m vertical gain from Bourg d’Oisans to Alpe d’Huez (Isère), via the cols de la Croix de Fer, du Télégraphe, du Galibier and the 21 turns on the ascent to Alpe d’Huez.

La Bourgui (28th July) With Thierry Bourguignon as patron, this race leaves Saint-Martin-de-Belleville (Savoie) and includes climbs and descents through Moûtiers, Villargerel, Naves, Cevins, La Léchère, Doucy, Saint-Laurent-de-la-Côte, before the final climb to Les Menuires and the finish line. You can choose between two courses - 127 km with 3250 m vertical gain, or 80 km with 1750 m vertical gain.

From Geneva to Nice, this seven-stage event brings together around 600 amateur riders.  The 866 km course includes 19 legendary cols, with more than 21,000 m vertical gain in total - the equivalent of more than two climbs of Mount Everest from sea level. The stages of the 2013 edition range from 108 to 164 km each, with vertical gains of 1560 to 3800 m. Geneva, Megève, Val d’Isère, Serre-Chevalier, Pra-Loup, Auron and Nice will be the stage towns of this third edition. In addition to the major Alpine cols - Cormet de Roselend, Iseran, Izoard, Cime de la Bonette,etc - riders will discover less well-known cols such as l’Encrenaz (in Haute Savoie), the col de l’Echelle at the France-Italy border and the col de la Cayolle in the heart of the Mercantour national park.

In 2013, for the first time the Haute Route will also take place in the Pyrénées, from Barcelona to Biarritz, from 1st to 7th September (750 km with 20,300 m vertical gain). The cols du Tourmalet, de Peyresourde, d'Aspin, d’Aubisque, the Port de Balès and climbs to Hautacam and the Plan de Beret are amongst the 19 challenges. 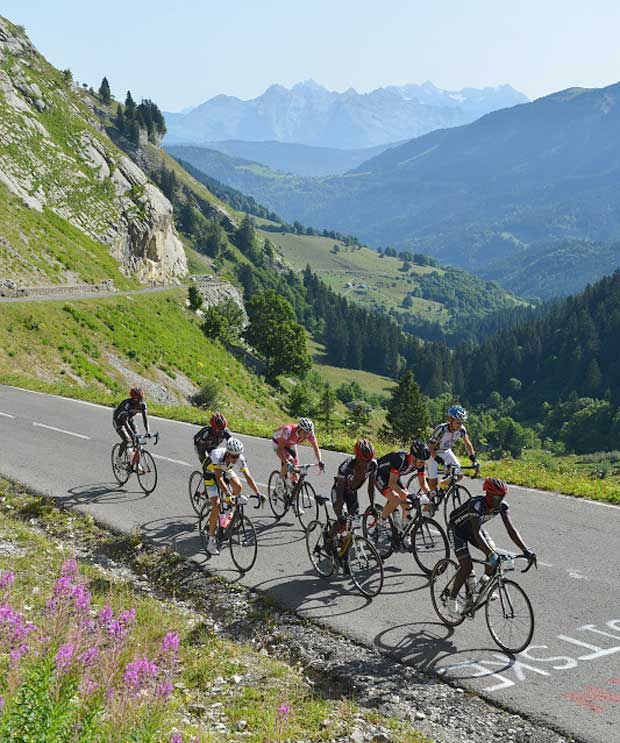