Sport, action, adventure, escape, empathy…these are the key words to describe the major events programmed for the 2013 winter season.  Once again, the French mountains have pulled out all the stops to make your winter stay unforgettable!Here are the essential events per massifs.

Sport, action, adventure, escape, empathy…these are the key words to describe the major events programmed for the 2013 winter season.  Once again, the French mountains have pulled out all the stops to make your winter stay unforgettable!Here are the essential events per massifs.

Each year, the Autrans Festival brings together mountain-lovers for documentary and fiction film screenings - with several previews - encounters with writers, conference debates and the Festitrail (a mountain running race).  This year, for the first event presided by Johann Perrier (replacing Mireille Chiocca), the theme will be “the mountains, last refuge for Adventure”.See you from 5th to 9th December.
www.festival-autrans.com

The first snowfall and the ‘7th art’ are on the menu of the European Cinema Festival in Les Arcs from 15th to the 22nd December.Around sixty films have been selected from the four corners of Europe.All illustrate the diversity and richness of cinema from the European continent.For its 4th event this year, the jury will be presided by the Romanian producer, Cristian Mungiu (“4 months, 3 weeks and 2 days”, Cannes Palme d’or in 2007), with Belgium being honoured.This choice pays tribute to the inventive, non-conformist and darkly humoristic films from the flat country, such as “Man Bites Dog” (“C'est arrivé près de chez vous”), a 1992 ‘mockumentory’ which has become a cult film today.  Good humour is guaranteed at the cinema, and in the resort, which will be particularly lively.

This winter, three of the thirteen stages of the Ski Cross World Cup will take place in France. In addition to the major event at Les Contamines-Montjoie (11th and 12th January 2013) - one of the most appreciated courses nicknamed by riders ‘the Kitzbühel of Ski Cross’ - the White Circus will also go to Val Thorens on 18th and 19th December 2012 and to Megève on 15th and 16th January 2013.   Three chances to see world-class skiers such as Ophélie David on her home slopes! 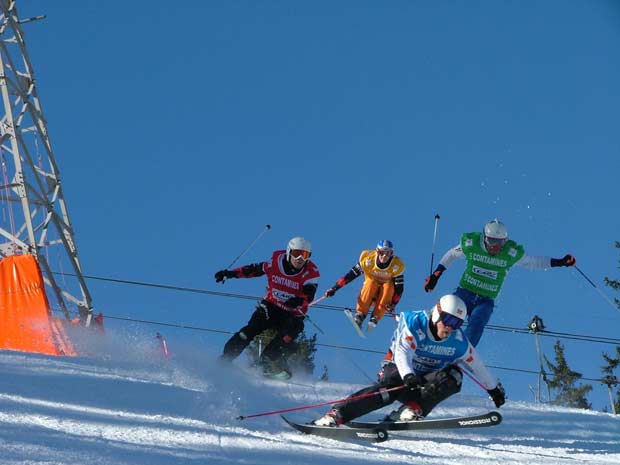 The Grande Odyssée sled dog race is the most gruelling in the world -  mushers and dogs need to cover 1000 km through Savoie and Haute-Savoie, in 11 stages, with a positive altitude gain of 30 000 m. This year, from 12th to 23rd January, 20 mushers from 12 countries will travel through the magnificent landscapes of the Grand Massif, the Espace Diamant, Megève, Praz-de-Lys Sommand and the Haute Maurienne Vanoise valley.
www.grandeodyssee.com 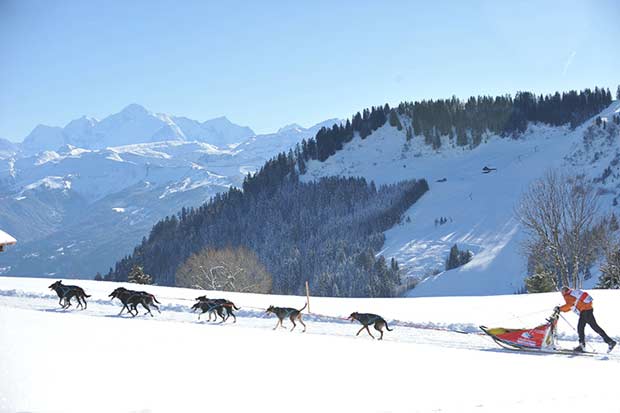 200 athletes from thirty countries are expected to compete on the Confins plateau, in the only French stage of the Cross-country Skiing World Cup on 19th and 20th January.The event will includeindividual races on Saturday 19th January (classic mass start, 10 km women, and 15 km men) and relays on the Sunday (4 x 5 km for women, 4 x 7.5 km for men).More than 20 000 spectators will be there to encourage their teams, and in particular the French team with Maurice Manificat, Jean-Marc Gaillard, Aurore Jean and Laure Barthélémy.
http://fis-ccwc-laclusaz.fr/

Organised in numerous resorts throughout the French mountains on 20th January, this day, launched by France Montagnes, will enable you to try out different snow sports and activities (snowshoe walking, cross-country skiing, telemark, big air bag etc).  There will also be festive events such as torch-lit descents, freestyle competitions open to all, musical events on the snow-front, and preferential rates for ski-passes or ski hire etc…This year the snowshoe festival also joins the event.

This stage - which will be a useful rehearsal for the Alpine Ski World Cup finals in 2015 - features a downhill race on Saturday 23rd February, followed by a super-combined race on Sunday 24th.  Lindsey Vonn, Maria Riesch or French hopeful Marie Marchand-Arvier will launch themselves down the Corbey piste, used for the women’s alpine skiing races at the Albertville Winter Games in 1992.  Ladies’ first!
www.meribel.com

All the major world stars - including the living snowboard legend Shawn White and Kevin Rolland, double winner of the half-pipe here in 2010 and 2011 - will be present in Tignes for THE definitive European freestyle competition. From 20th to 22nd March, the competition will be intense in slope style and half-pipe (ski and snowboard, women and men).  There will also be snowmobile demonstrations and numerous events, not to mention wild parties on the dance-floor!
www.xgames.tignes.net 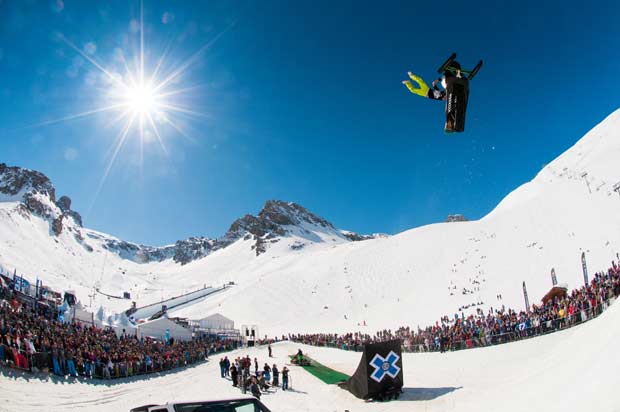 Rock The Pistes is 10 free pop/rock concerts, on temporary, unusual stages - in this case in the middle of the pistes in the Portes du Soleil ski area.  An après-ski fringe festival will keep the fun going and enable you to discover the new French music scene, in the heart of the resorts.From 20th to 24th March.
www.rockthepistes.com

From 9th to 15th February, the resorts of the Pays des Ecrins (Puy-Saint-Vincent, Pelvoux and Vallouise) will host the World Ski Mountaineering Championships.Two hundred athletes from around thirty countries will compete in the mythical Ecrins Mountains.The event will include five competitions:an individual race, a team race, the formidable Vertical Race, a relay and a sprint.To confront these challenges, the competitors must combine rapidity, skill and team spirit.They will need all the help they can get from the general public, who can encourage them at different points.www.ski-ecrins.com 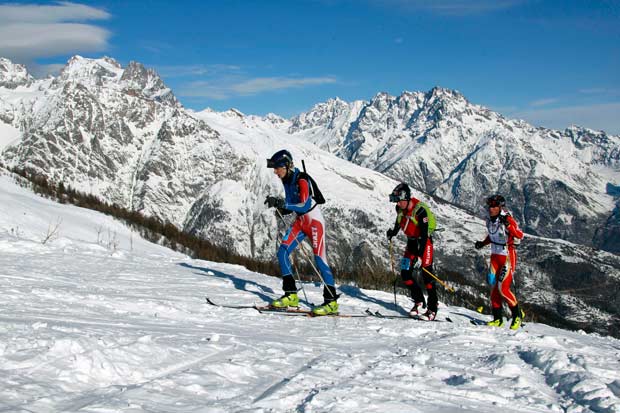 The Col du Lautaret, situated at 2000m high at the entrance to the Serre-Chevalier valley, is an internationally well-known spot for snow kites.From 5th to 12th January, the snow kite masters will take place there, with the best world competitors in this spectacular sport.The same week, the French snow kite freestyle championships will also take place in this spot known for its particularly favourable atmospheric conditions. In other words, everyone who counts in the sport will be there and the competition will be intense!During the week, the general public can try out the sport.An equipment fair and demonstrations will complete the discovery of this original and trendy sport.
www.snowkitemaster.com 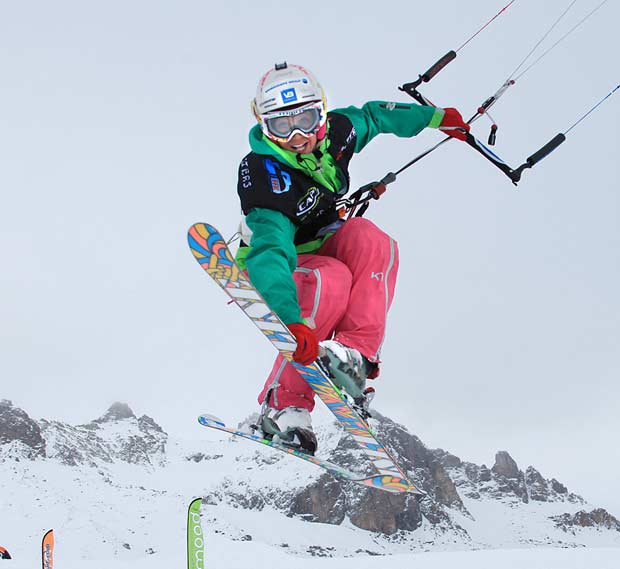 Isola 2000 will host the French kids snowboard championships from 22nd to 24th March.This competition brings together the best FFS-licensed competitors in snowboarding in the 8 - 15 years age categories, representing a total of 150 children from all the French mountain regions.The event will include slope style (freestyle in the snow park), a parallel giant slalom and a boarder cross competition.The days will also be the occasion for the resort to organise a big festival for all young people.Day passes are free of charge for children under 12 years for the three event days.A beginner snow park will be set up on the snow-front, and Isola 2000 French Ski School (ESF) will give free introductions to snowboarding for children.
www.hiver.isola2000.com 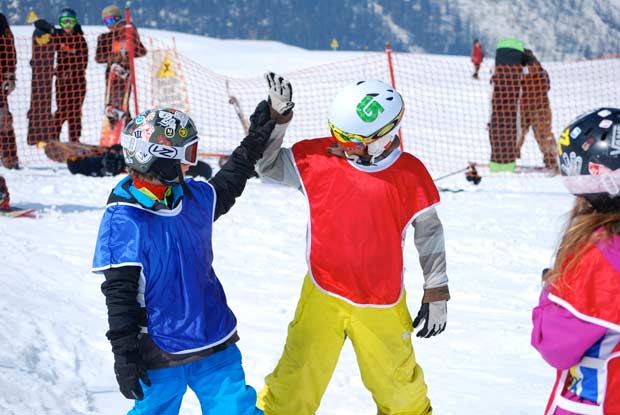 From 19th to 26th January, Vars hosts the world speed skiing championships - it will take your breath away!The competition takes place on the legendary Chabrières slope, which has a maximum slope angle of 98% at the summit –i.e. almost a vertical wall!The hundred orso competitors, from twenty different countries, seem to come from another planet, with their aerodynamic helmets, their skin-tight racing suits and fins attached behind their calves.They reach speeds of more than 200 km/h, helped by nerves of steel.The adrenalin rush is, of course, for the competitors, but also for the spectators of this very impressive competition!The general public can also experience the joys of speed, at the base of the slope, where introductory lessons are carried out by Philippe Billy, who holds the speed record for the slope at 243.90 km/h.
www.vars.com/hiver/fr/vars-evenements-animations-news.asp

After 30 years absence, the French elite skiers return to the Pyrenées!Peyragudes hosts the 100th French Alpine skiing championships from 18th to 24th March.This anniversary edition brings together the best French skiers in slalom, giant, super giant and downhill competitions.Amongst them you will see skiers who represent France in world-class competitions, and who are hoping to win a national title, to add to their successes! www.peyragudes.com

The greatest French adventurers have visited Les Angles since the start of the Festival of Adventure at the beginning of the 1990s - Jacques Maillol (free diver who inspired the film ‘The Big Blue’), Eric Tabarly (record-setting long distance yachtsman), Gérard d’Aboville (first man to row across two oceans solo), Catherine Destivelle (mountaineer), Laurence de la Ferrière (alpinist and explorer)…to name just a few of the people who have come to the resort to recount their exploits and share their passion.

From 21st to 25th January, the Pyrenées resort will bring together novices and experienced globe-trotters for the 24th annual festival, for great escapes to the four corners of our planet. Ski during the day and escape in the evening!
www.lesangles.com

Freeride and cinema are a good mix.The proof is the International Freeride Film Festival at Saint-Lary-Soulan, the premier resort in the Pyrenées for this sport, and home of star riders such as Bruno Compagnet and the de la Ruebrothers.From 19th to 23rd December, just before the Christmas holidays, the 8th event of this window on freeriding will take place, with screenings of the best films from all over the world.The public screenings are from 5pm to 11pm, which leaves the rest of the day free for maximum fun on snow! There will be concerts at the festival and in the bars of Saint-Lary, with numerous other events open to all.
www.festival-freeride.com

Final of the Andros Trophy in Super-Besse

This year, the final of the Andros Trophy - a car race on ice - will come to the Massif Central.On the 2nd February, on the meticulously prepared circuit of Super-Besse, drivers will end the season, which began in Val Thorens on 8th and 9th December, and went to Andorra, Alpe d’Huez, Isola 2000, Lans-en-Vercours and Saint-Dié in the Vosges.On the menu, you will find speed, technology and daring from the experienced drivers and guest celebrities, who are fans of motor sports.The Trophy has evolved over the years, with a competition reserved for electric cars for the last three seasons.Former racing driver Alain Prost was last-year’s winner.Who will succeed him and win the trophy in 2013?
www.tropheeandros.com 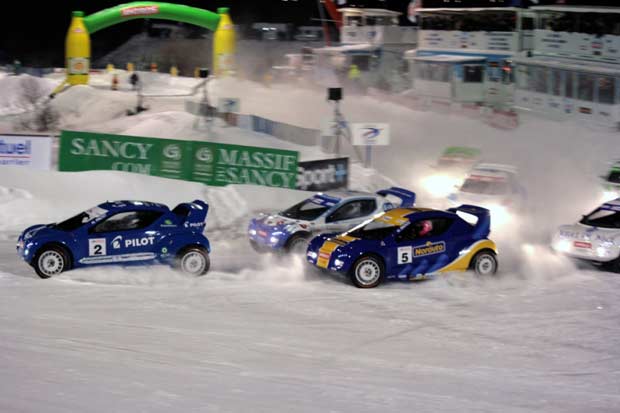 Since its beginnings in 1995, the Sancy Snow Jazz Festival has concentrated on traditional jazz and New Orleans - considered by purists to be the only true jazz.Jazz will be played in around forty places in Mont-Dore and the Sancy massif - bars, restaurants, clubs, everyone coming together in a convivial atmosphere.The 2013 event will take place in the middle of the skiing season, from 23rd February to 2nd March.Concerts will start in the afternoons and sometimes last late into the night.Sheer delight after a day spent in the fresh air on snowy slopes and trails.
www.sancy-snowjazz.com 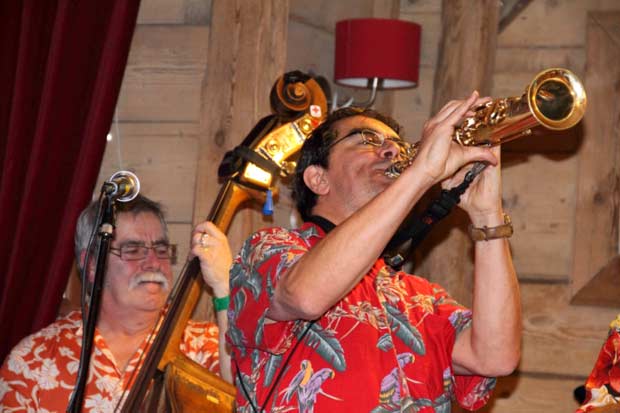 Shivers are guaranteed in Gerardmer where the International Fantastic Film Festival has been held for the last twenty years.The resort gives pride of place to this genre cinema “invented” by Georges Meliès with his famous Trip to the Moon (1902).  The Vosges festival plays the card of diversity by selecting works in supernatural, bizarre, horror, thriller categories…With special effects, producers can use their imagination, and we can’t help but notice that they don’t restrain themselves!On the fringe of the screenings, you will find fantastic events throughout the resort, with educational and practical workshops for the young to discover the fantastic cinema, a literary fair to meet authors specialising in this field, artistic exhibitions and even a video game area which is always full!See you from 30th January to 3rd February for the 2013 festival.
www.festival-gerardmer.com