You no longer need to put away your mountain bike in the garage or your clubs and mallets in the cupboard just because the mountain is cloaked in white!  Summer sports such as mountain biking, golf and polo adapt well to snow.In winter conditions, they can be more fun and often spectacular.

You no longer need to put away your mountain bike in the garage or your clubs and mallets in the cupboard just because the mountain is cloaked in white!  Summer sports such as mountain biking, golf and polo adapt well to snow.In winter conditions, they can be more fun and often spectacular.

Of the three summer sports which extend into winter, mountain biking is undoubtedly the most accessible.“Beginners feel good from the start.There is less apprehension than in the summer, as the snow cushions any falls and you don’t hurt yourself as much”, explains Julien Rebuffet, President of the French National Union of Cycling Instructors, MCF.    Winter mountain biking initially developed as an alternative activity in case of lack of snow.Then progressively, some handlebar aces launched themselves down the snowy slopes of the Alps and Pyrenees, thus expanding the popularity of the sport in several resorts once the slopes are closed (Saint-Pierre-de-Chartreuse, the 2Alpes, Val Thorens, Tignes, Ax-3Domaines, Gourette, La Pierre-Saint-Martin…).  Mountain biking is faster on snow, as it evens out any bumps in the terrain.“And unlike skiers who enjoy carving turns, mountain bikers head straight down!” Mountain biking on snow also works well at night as an après-ski activity.The first advantage is that there are no conflicts on the slopes.At night, with the fall in temperatures, the snow hardens and there is better traction.Bike tyres are not studded to grip the snow better as you might expect, but are notched and larger, similar to those used for mud.  “The more the snow is compacted, the better it is", affirms Julien Rebuffet, who explains that the best position to speed down the snowfields on two wheels is slightly raised, like horse riders when jumping obstacles.The resort of Les Menuires, in Savoie, is betting on the potential of this still relatively unknown sport, by setting up a dedicated slope - the Roc'n bike.  On this 8km-long slope, you can gently discover the art of riding (and braking) on snow, accompanied by a specialised instructor.  Expect it to inspire others.

Swing on a white carpet

Playing on a white carpet is so pleasant that whilst it is still reserved for “insiders” (celebrities, high-level sportspeople, decision-makers), snow golf should appeal to a wider audience.You only have to see the interest from the general public during major events such as the BMW Megève Winter Golf or the Vacheron-Constantin Snow Golf Cup, also in Megève. These two events are “chic” but also sporty, with the best golfers coming for the summits and a breath of fresh air. During these events, introductory sessions are a hit. It was Philippe Ghillem, amateur golfer and jeweller in the Haute Savoie resort who introduced snow golf, which is popular in Scandinavia. The snow needs to be compacted once the first snowflakes fall.The little ball - red so that it stands out in the immaculate white surroundings - flies well in the high altitude, but doesn’t bounce,so shots need to be adapted to this unusual environment. Over the last few years, golf has left the greens with the rise in street golf.
This leisure activity, born in Germany in the 1990s, is a fun variation of classic golf, which leaves behind the rules and codes. The clubs are the same, but the balls are softer, as players must adapt their swings to street furniture (dustbins, street lights, signs, cars…) and pedestrians! This version, which really democratises golf also exists in a winter version -the snow street golf. Les Gets was the first resort to launch a nocturnal event in 2008 in the heart of the village.“Last winter, more than 1000 people took part in this competition, creating an incredible atmosphere in the main street where we improvise a six hole course”, explains Benjamin Mugnier, Marketing and Sales Manager for the Haute Savoie resort.  The evening ends around a big country soup - a long way from the usual chic buffets in the club house!  See you in February 2013 for the 4th edition. 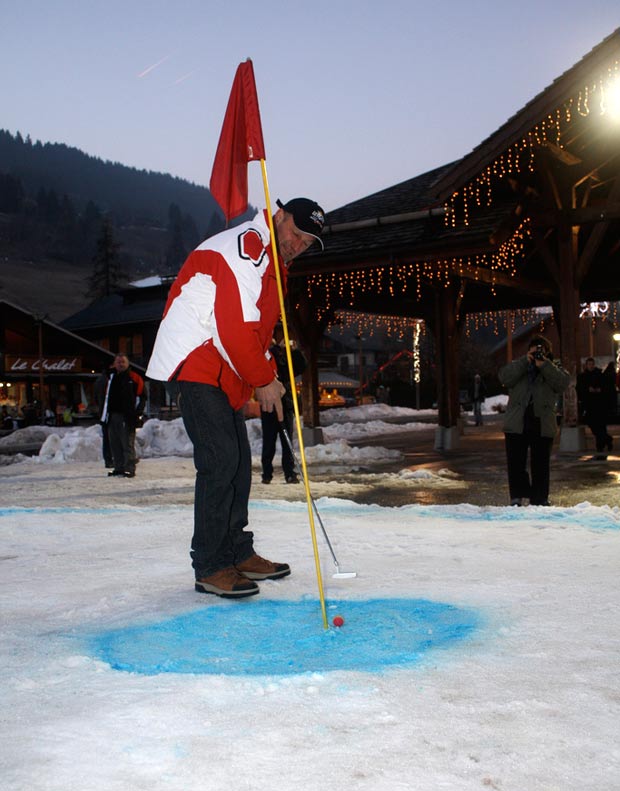 The so-called sport of kings - in an allusion to its origins* - is also well suited to snowy fields. Led by the British clientele, polo arrived more than 30 years ago in Saint-Moritz, Switzerland. “A polo player for 25 years, I went to see what these tournaments were like on snow around 20 years ago”, explains Jean-Yves Delfosse, organiser of the BMW Polo Masters Tour.  “I was impressed straight away by the fast-paced game and the atmosphere, and I thought that we should organise matches on this side of the Alps.  Megève, where I live for part of the year and where horses are part of the local history, was perfect for welcoming an event around this stylish sport, which fits the DNA of the resort.”The passion between polo and Megève has lasted for more than 18 years.And it is contagious as Jean-Yves Delfosse has since launched a circuit, with matches in Val d'Isère and Courchevel.“Organising the BMW Polo Master tournaments in these tourist areas helps give the sport a less ‘exclusive’ and elitist image.” Enthusiasts and beginners appreciate the matches which are really spectacular on the snow. Against a white background, riders and ponies stand out more than against grass, making this equestrian sport far more spectator-friendly than the summer version.  In addition, the smaller fields lead to faster action. The best French, Argentine, Swiss and Spanish players flock to these winter tournaments, providing high-level sport to a quickly-seduced public.

*it was played by Alexander the Great and the kings of Central Asia, before developing in India, Great Britain and Latin America.