Originally from Scandinavia and popularised at the beginning of the 20th century by the English staying in Saint-Moritz, ski-joering was re-launched in the Alps around twenty years ago. This fun and accessible equestrian discipline - combining horses and skiing - is thriving. Try it this winter, even if you're not a rider!

Originally from Scandinavia and popularised at the beginning of the 20th century by the English staying in Saint-Moritz, ski-joering was re-launched in the Alps around twenty years ago. This fun and accessible equestrian discipline - combining horses and skiing - is thriving. Try it this winter, even if you're not a rider!

Like dog sledding, ski-joering - another type of sliding pulled by an animal - comes from the cold North or more precisely from Scandinavia, where snow covers the ground for long months. To get around, people put on their skis and were pulled by reindeer, before these were replaced by faster, more powerful horses.

With the introduction of winter sports, at the beginning of the 20th century, ski-joering became a leisure activity. The first races were held in 1906 in Saint-Moritz, by the British, great fans of equestrian sports. Today, the Swiss resort is still the ‘Mecca’for the sports version of the discipline.

In France, ski-joering was primarily utilitarian, with horses pulling skiers up the slopes before the arrival of ski lifts. “It was when I found an old postcard showing skiers being pulled by horses that I thought we could update this activity in our resorts”, relates Jacques Fillietroz, of the Cavale equestrian centre in Les Arcs. This ski patrolman and high mountain guide was one of the main drivers of the rebirth of ski-joering in France in the 1990s. His equestrian centre is where most horse riding instructors from the different French mountains come to learn the discipline, which is recognised by the Federal authorities.There is a very competitive French championship in this sport which can also take place on grass or sand, using appropriate ski equipment.

For its promoters, winter ski-joering is easily accessible for the general public.  “You don’t need to be a horse rider to do ski-joering”, reassures Michaël Mesas from the Alpe d’Huez equestrian centre, which has a 850 m beginner's ring at 2000m high. “You just need to be comfortable with skiing, with a minimum skiing level of 1ere étoile(1st star or low intermediate) for an introductory lesson”.

After a couple of minutes briefing to explain how the skier has to position himself behind the horse and the actions needed to guide the animal, you can go solo and experience the pleasure of being pulled along by man’s most fabulous conquest. Preferably in an enclosed, flat space. For the less adventurous or for beginners, an instructor can be next to the skier or even on the horse to guide it.  “You just have to let yourself slide along, without having to worry about steering the horse”, explains Evelyn Joachim, from the Les Orres equestrian centre in the Southern Alps, another ski-joering pioneer in France. 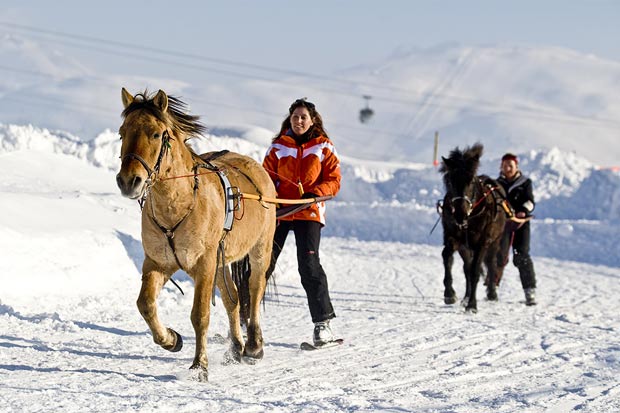 At the Ecuries de la Dordogne in Mont Dore –the only place to offer this activity in Auvergne - Frédérique Bertholon and Jean- Marie Laurent offer different workshops. The driving workshop is particularly exhilarating, letting you forget about your skis and drive the horse on your own through laid-out courses - easy slaloms for beginners up to gymkhanas including chicanes, jumps, narrow passages and special slaloms for the more experienced.  “During advanced sessions, the students can even complete sequences of jumps over obstacles, where the horse jumps first with the skier jumping via a ramp next to the obstacle -  for guaranteed thrills!”, adds Jean-Marie Laurent.

In Les Arcs, where 20 km of dedicated routes have been prepared by the resort, Jacques Fillietroz and his team organise two-hour tours, in the forest or on the immaculate crests near Arc 2000, with a magnificent view over the Haute-Tarentaise valley and the surrounding summits. “For next winter, we are even in the process of preparing a route for ski-joering up to the Dôme de Vogel, with a meal stop at the famous refuge. It will be a 100% natural ski-joering trip”.

In Alpe d’Huez, Michael Mesas invites the more experienced ski-joerers to go out for 40 minute trips to the different sectors of the ski area, at 5pm, once the pistes are closed.  A unique occasion to experience the freedom of skiing behind galloping horses. “It is during gallops that ski-joering is the most exhilarating”, insists Evelyn Joachim. At the Ecuries du Mont d'Or and the Lacs in Métabief, in the Jura, the dual formula will excite horse riding enthusiasts as participants take turns to ski or ride the horse during the session.

What age do you have to be to try out this fun sport? Around six years old, with animals adapted to their height - Shetland ponies for the smallest and double ponies or small horses for adults. In Les Orres, Evelyn Joachim has launched baby ski-joering for 3-4 year olds, “As long as the child has the ‘Ourson’level in skiing”, she says. These sessions last around thirty minutes, with gentle Shetland ponies led by hand, that children first brush and get to know. Guaranteed success!