If your idea of skiing is more than simply going up and down the same pistes all day long, the French mountains will surpass your expectations. Linked skiable areas allow you to move freely from station to station through breathtaking natural landscape, from stark mountain peaks to lush pine forests, all in the same day.

If your idea of skiing is more than simply going up and down the same pistes all day long, the French mountains will surpass your expectations. Linked skiable areas allow you to move freely from station to station through breathtaking natural landscape, from stark mountain peaks to lush pine forests, all in the same day.

Trois Vallées is the linked skiable domain par excellence. It includes the stations of Courchevel, Méribel, Val Thorens, Les Ménuires, Saint-Martin-de-Belleville and La Tania, as well as the villages of Orelle and Brides-les-Bains, connected by cable car. With 600 kilometres of pistes varying in altitude from 1100 to 3230 metres, serviced by ultra-fast chairlifts which allow passage from one station to another in just 15 minutes, it is a dream for outdoor enthusiasts. Insider tip? Ski for just EUR 38,50 (compared to EUR 48,50) on Saturdays when you buy or top up your pass at http://www.les3vallees.com/.

The latest of the linked skiable areas, Paradiski opened in December 2003 with the inauguration of the Vanoise Express. This 200-seat télépherique links Arcs / Peisey-Vallandry and La Plagne (as well as the satellite stations Montchavin-les-Coches and Champagny-en-Vanoise). Paradiski offers 425 kilometres of stepped pistes varying in altitude from 1200 to 3250 metres of altitude, facing the majestic Mont Blanc. With two glaciers, 70% of the skiable area above 2000 metres and optimal exposition, snow quality is all but guaranteed from the beginning of December until the end of April. 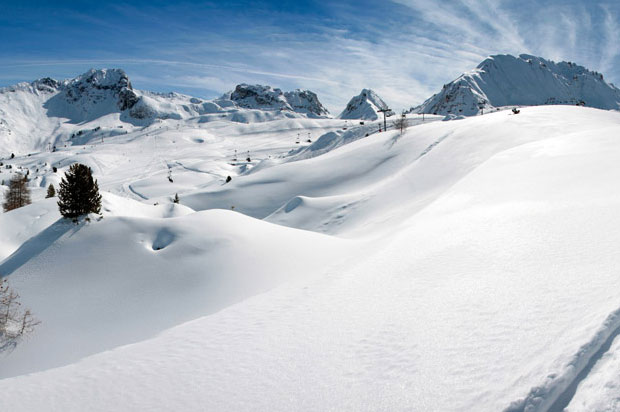 Bringing together the stations of Tignes and Val d’Isère, l’Espace Killy offers 300 kilometres of marked pistes with a 1900 metre difference in altitude (1550 m  - 3450 m). The area is reputed for its excellent skiing quality, for all styles. It is no coincidence that some of the most important international ski competitions are, or have been, held here: the World Cup, Olympic Games, and Alpine Ski Championships at Val d’Isère (some on the legendary Face de Bellevarde), and the World Freeride Championships and Winter X-Games at Tignes.

The area of Grand Tourmalet links Barèges to La Mongie and to the Col du Tourmalet. Situated at the foot of the pistes, La Mongrie offers an authentic mountain ambiance, and

the charming village of Barèges, at 4 km from the pistes, can be reached via a free shuttle. The area offers 100 km of marked pistes between 1400 and 2500 metres of altitude. Open to skiers since the 2006-2007 season, the descent from the Pic du Midi de Bigorre (2886 metres of altitude) is a must for freeriders.

Bridging 650 kilometres, 283 pistes, and 12 stations in France (Abondance, Avoriaz, Châtel, la Chapelle d’Abondance, les Gets, Montriond, Morzine-Avoriaz, Saint-Jean-d’Aulps) and Switzerland (Les Crosets, Champéry, Champoussin and Morgins), interconnectivity is the calling card of Portes du Soleil. Despite the impressive size of the domain, visitors will still be treated to glimpses of virgin forest, mountain pastures and centuries-old chalets during their passages on the chairlifts. The icing on the cake is the exceptional snowfall within the area, with an accumulated snow depth of nearly 7.5 metres each winter.

L’Alpe d’Huez, Oz-en-Oisans, Vaujany, Auris-en-Oisans, Villard-Reculas and Huez form the Alpe d’Huez Grand Domaine. Here, skiers will discover a veritable playground, with 250 km of marked trails, including the legendary Noire de Sarenne, 16 km long with a 1820 metre difference in altitude, between the Pic Blanc (the summit of the station) at 3330 metres, and the Gorges of Sarenne, at 1510 metres. The area offers three other descents which approach or surpass 2000 metres of difference in altitude in one single stretch, from the Pic Blanc.

Monts-Jura, situated in the south of the Jura Massifs, unites three important sites for alpine skiing - Lelex-Crozet, 15 minutes from Geneva, Mijoux-la-Faucille, 10 minutes from Gex, and Menthières, 15 minutes from Bellegarde, and counts 60 km of pistes with an 800 metre difference in altitude. Best of all, visitors will also enjoy a breathtaking view over Lake Geneva. Monts-Jura also includes two cross-country skiing areas (Menthières and La Vattay-Valserine, at 5 minutes from the Faucille pass) which extend over 120 km of linked, double-track groomed trails (skating and alternative).

Linking the stations of Pra-Loup and the Foux d’Allos, l’Espàce Lumière counts 81 pistes (13 green, 31 blue, 32 red and 5 black) totalling 180 km, with 1100 metres of difference in altitude (2600 to 1500 metres.) The area, serviced by 43 chairlifts, has a southern ambiance thanks to its larch trees and permeating sunshine. Famous names such as Emile Allais, a French ski legend and first monitor of the ESF, as well as Honoré Bonnet, former coach of the French alpine ski team during the days of Killy and Goitschel, were instrumental in the creation of the Pra-Loup station.