During the summer, the ascent to the Alpe d’Huez counts over 1000 cyclists daily – and up to 4000 daily on the days before and after the Tour de France passes through. La Marmotte, a challenging 174-km tour which leads cyclists from the Croix de Fer to the Télégraphe to Galibier, finishing with the ascent to Alpe d’Huez (in total, an ascent of 5000 metres) attracts 7000 participants each year. These two examples illustrate the allure of the French mountains for both French and foreign (primarily Belgian and Dutch) cyclists. 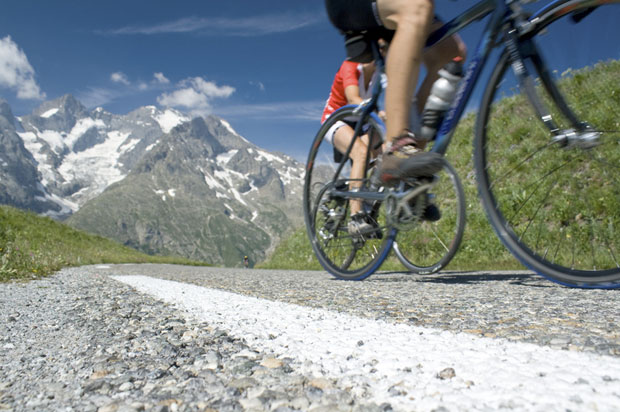 With 2240 mountain pass routes, France is a veritable playground for cyclists. Of these passes, 25 are located above 2000 metres of altitude – 20 in the Alps, 5 in the Pyrenees. It is above all these high-altitude passes that attract cyclists from around the world. La Route des Grandes Alpes is a 684-km route which links Thonon-les-Bains (Haute-Savoie) and Menton (Alpes-Maritimes) and counts an upward climb of 15 713 metres. The route crosses 16 mountain passes, of which 5 are located above 2000 metres (Iseran, Galibier, Izoard, Vars, and Cayolle). By taking small detours, cyclists can also attempt other legendary ascents such as Croix de Fer and Cime de la Bonnette.

Every year in June, the association Courir et Découvrir offers organised tours of this 6-step cycling route, which include food, lodging, baggage transport, and medical care. More information can be found at http://www.grande-traversee-alpes.com.

Not everyone possesses the physical condition necessary to attempt these mountain passes all at once. If this is the case, cyclists can also attempt just one. Cols réservés initiatives, which close the roads to automobile traffic in the morning, make the experience all the more enjoyable. The ascents of Iseran, Galibier, Izoard, Bonnette, Cayolle, Madeleine, Granon, Aravis and Ramaz are among those which offer this service, meaning cyclists can practice their sport without having to contend with automobile fumes or traffic noise, enjoying instead the sound of their tires on the road and maybe even the whistle of a marmot.

An important key to success when attempting tough ascents is to control energy output. This means knowing the profile of the ascent. This information can be found in the “Atlas des Cols” (Altigraph Editions) and on specialised websites such as www.salite.ch. Now, cyclists can also inform themselves en route, thanks to distance markers which detail the altitude, distance to the pass, and average incline of the upcoming kilometre. These markers are prevalent in the regions of Savoy, Haute-Savoie, Hautes Pyrénées and Hautes-Alpes.

Even if you cannot compare your performance to that of pros such as Andy Schleck, Cadel Evans or Alberto Contador, you can compare it to that of other amateur cyclists. Chronometric chips, sold in tourist offices, are now available for numerous ascents such as Alpe d’Huez, Mont Ventoux, Glandon, Galibier, Mont-Cenis, La Plagne, Deux-Alpes, and Courchevel, among others. These chips are activated automatically when you pass in front of the distance markers at the foot and summit of the passes. Your time and ranking can then be consulted on a dedicated website.

A grand adventure awaits you along the mountain pass routes of France, so grab your bicycle and start training!