Affectionately referred to as «the red sweaters», for these men and women it is a sign of recognition, even if it’s their bronze medal, sun tan, technique and teaching skills that really set them apart.

Up until 1958, French ski instructors wore navy blue pullovers with a red, white and blue strip. Dark-coloured ski and sportswear was a far cry from the 1950’s world of fashion, which was starting to introduce ski pants with flashes of bright green and petrol blue, much sought after by fashionistas at the time. This trend didn’t go unnoticed by Rémi Ramillon, owner of Ramy ski bindings, who voiced his feelings in the ‘Neige et Glace’ (snow and ice) magazine in 1957: «winter sports are the modern day version of Carnival. Dressing up is de rigueur, the youth of today wants something new, something colourful, something unexpected; a paradox.»

The following year, Henri Thiolière, a former member of the French team, coach to champions and teacher at the French National Ski and Mountaineering school (ENSA), unintentionally brought about the arrival of the red sweater. Back in 1958 he said: «Mickey Mora, who was head instructor at ENSA, asked me to find a special uniform for a short film about the Christiania léger ski position… So I headed off to Annecy to see our clothing supplier, Montant, and I asked them to make us 5 red sweaters. When Mora caught sight of us all arriving dressed in red, I heard him cry out: “But you’ve gone mad, what on earth do you expect us to do with those?!” I replied: “But you told me to do something different, so at least now we’ll be easy to spot!”» During a gathering of the French ski instructors union in Megève, the five skiers and actors from the film arrived wearing their red sweaters. Gaston Cathiard, founder and first President of the union exclaimed: «This is exactly what we need, all the instructors should be wearing one!» 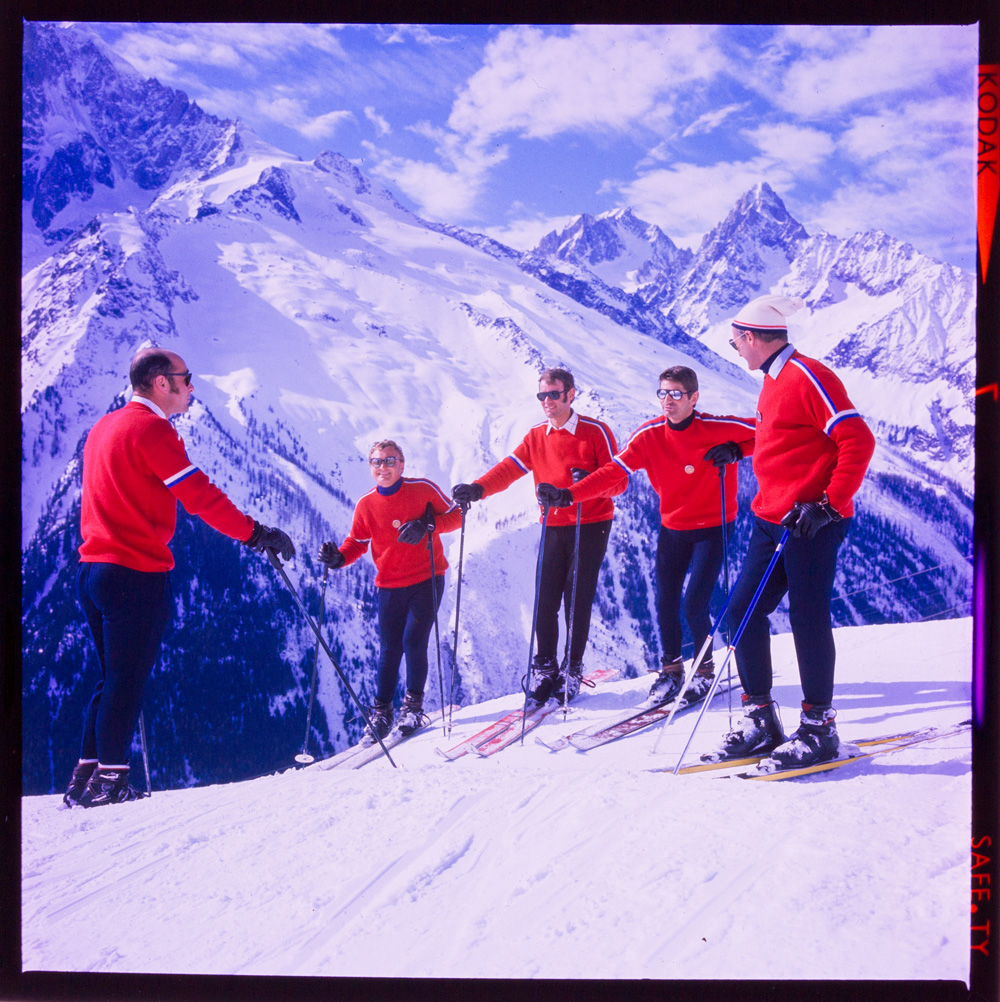 The thousand or so ski instructors teaching in France at the time all received a pull Montant sweater; too short, too big and bearing an embroidered little teddy bear that André Montant had adopted as his logo in tribute to Henry Ours, fashion designer of the 1940’s. Created in 1951 by André Montant and his wife, the company only used pure brushed anti-felt wool from spinning mills in northern France, systematically working with the same category of yarn; the only difference in the  sweaters was the thickness of the yarn, which ranged from 1 to 8, depending on the model. Although it would have reduced their labour costs, the Montants were not interested in buying machines to thermostick the fibres together, even for the little teddy bear, instead, all the embroidered finishing touches were done by hand. Already official supplier of the French ski team, the little hosiery business needed to grow quickly if it was to kit out the ski instructors, who were quickly growing in number. The conquest of the slopes was in full swing. 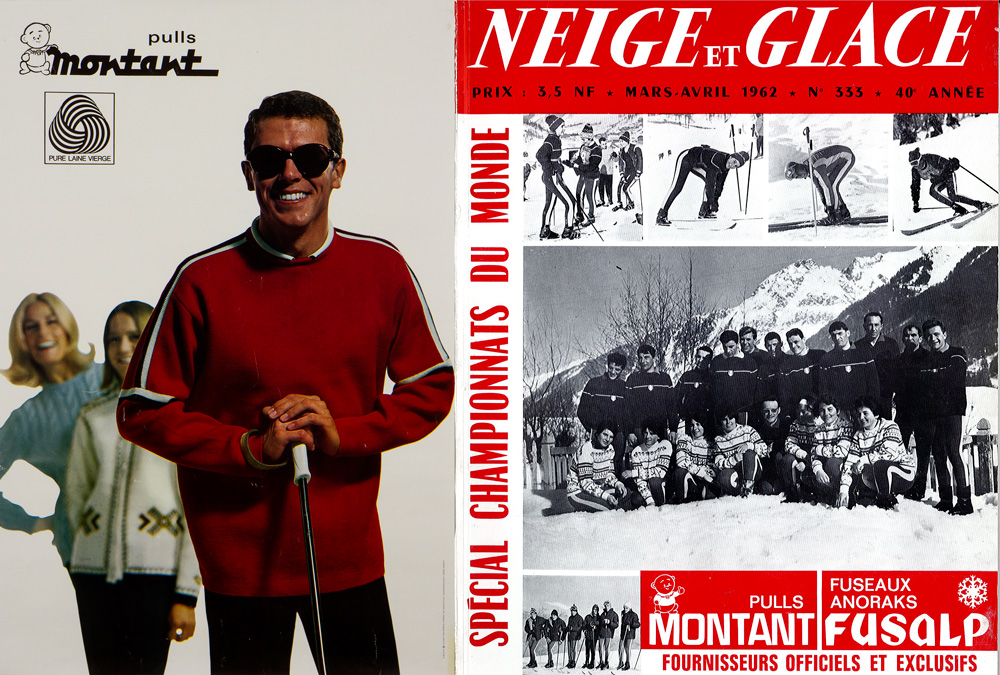 An advert for pulls Montant sweaters from 1963 and No. 333 of the Neige et Glace (snow and ice) magazine from April 1962. © Département de la Haute-Savoie

The red sweater is to the ski instructor what the white coat is to the nurse, or the black gown to the lawyer. In 2007, during a lawsuit which saw independant ski instructors accuse the ESF French Ski School of using their colours as an assurance of national recognition, Grenoble crown court found that: «Red clothing clearly signifies the professional qualifications of the person wearing it. It makes it easy to clearly distinguish a mountain professional on the slopes from afar, or in a crowd.» Today, ESF ski instructors dress in red from head to toe, according to the official French Ski School charter. For winter 2013-2014 an agreement was signed with the Duvillard ready-to-wear brand: the latest of the red sweaters, it was remodelled and is now designed and made in Le Creusot, France. 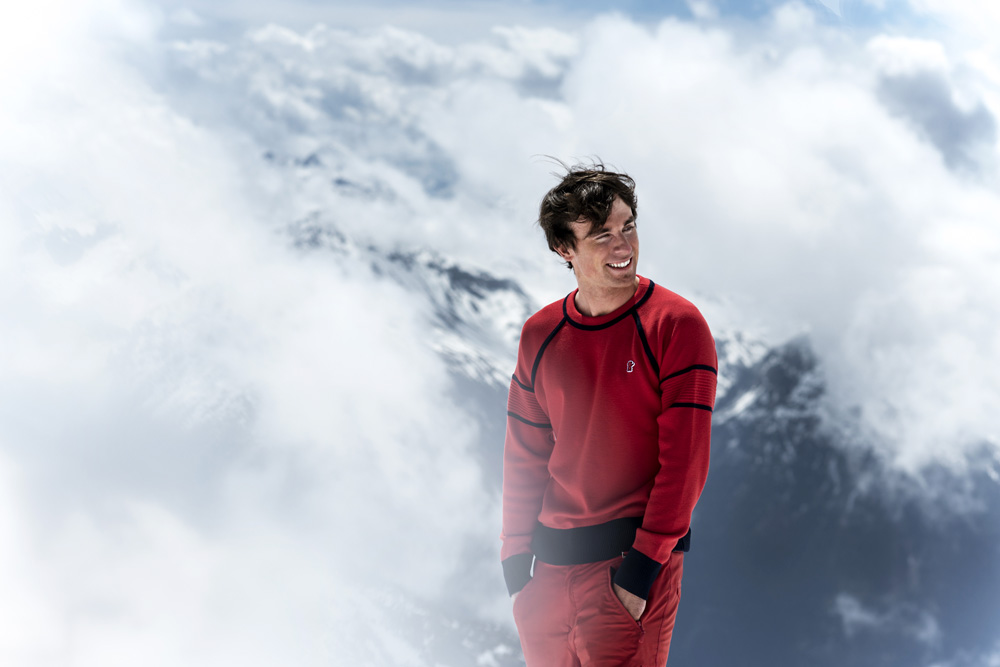 Revival of the pull Montant

In 1974, the Annecy based Fusalp company wanted to launch its own knitwear range. With his hosiery business going through financial difficulties, André reluctantly handed over the reins of his company to them; Fusalp took over the sales and marketing and received a commission on all sales made. Little by little, Fusalp acquired Montant and in 1975 it bought premises in Rumilly in which to house knitting machines and make pullovers. However, the economic crisis brought about by the first oil shock, combined with foreign competition forced the new owner to stop production. However, the brand still existed, just biding its time like Sleeping Beauty.

That time came in 2015 when Fusalp revived the legendary brand with a «Made In France» collection designed by Mathilde Lacoste, inspired by her past and skiing dress codes. Made from pure merino wool, the models symbolised the history of the pulls Montant, such as the French teams’ navy blue colours and the ski instructors’ red.