Who ever said the mountains are only for adults?  All along the summer, the resorts offer numerous activities designed for kids.  With so many performances, games, sports and adventures to choose from, your kids will be spoiled for choice!

Who ever said the mountains are only for adults?  All along the summer, the resorts offer numerous activities designed for kids.  With so many performances, games, sports and adventures to choose from, your kids will be spoiled for choice!

Riddles, puzzles, card games, board games…for four days, Auron becomes a gamer’s paradise.  From traditional games that never go out of style, to the latest and greatest new games, there is something for every taste, for kids and adults alike. The creators of the games will also be present.

Explore the forest in the morning and play sports in the afternoon (climbing, canyoning, mountain biking, hiking accompanied by donkeys).  Kids can also take part in educational workshops and see great performances, all on the program for this very special week during which kids are the kings!

As the name clearly states, this week is entirely dedicated to kids.  Activities, sports tournaments and performances are on the program.  Moreover, it won’t cost you a penny – it is free, like numerous activities in the mountains in summer (archery, tennis, fitness…)

This multi-activity trek, destined for kids from 8 to 13, allows young adventurers to test their limits with challenges such as orienteering courses, mountain biking (bikes provided if your child does not have one), and zip lines.  Adventure is the word, may the best kid win!

Circus, theatre, music…the performing arts take the stage for the 20th anniversary edition of this festival, which proposes a multitude of shows on indoor and outdoor stages, many of them free of charge.  « Au bonheur des Mômes » includes workshops, games, musicals, expositions, a reading tent, and free activities all week long.

Directed by the magic wand of Dominique Webb and Miredieu, a multitude of performances, parties and competitions for all ages are on the programme.  Magicians and their talented friends will compete in a show of dexterity and innovation for the coveted Magic Méribel trophies.

This is the festival where fantasy becomes reality!  For three days, Morzine will be overrun with elves.  Parents and kids are invited to participate in a multitude of magic workshops, and meet animals and other creatures from fantasy land.  Free performances and activities daily.

The 9th edition of the Festival de Cinéma Jeune Public (film festival for a young audience) of the Massif du Sancy proposes films for 3-12 year-olds and for the whole family.  Three international shorts competitions, unreleased films and avant-premieres are on the programme.  And don’t forget about the shows, exhibitions, dedications, meetings with professionals of the film industry, and many other surprises!

Travel back in time to the middle ages!  Here, forget about the PS3 and enjoy traditional games, coin-making workshops, archery stands, and more.  The icing on the cake is of course the combat demonstration in traditional dress, much more impressive than any video game!

Walking in the mountains isn’t always fun for kids.  Thanks to the festival festival « Chamrousse en piste », they will discover the bright side!  All it takes is a good pair of shoes, and they are ready to enter an enchanted world where musicians, singers, clowns and other circus performers await along the trails.  A street-theatre festival mixed with hiking, guided walks, and performance in the mountains!

This out-of-the-ordinary trek is not a race against the clock, but rather an occasion to spend time together as a family.  All along the route, you will participate in fun, athletic challenges such as an orienteering course, crossing a high-altitude lake by canoe, climbing, a quiz, and more!

Each day, a different selection of games is proposed: inflatable structures (free), traditional wooden games, Olympic challenges and Sumo competitions.  During this week, parents can also take advantage of the artisans’ market on July 14th, for a festive ambiance ending with a fireworks display.  The perfect way to unwind!

This is THE event for urban sports enthusiasts, and it is happening at Plagne-Bellecôte.  Your kids can try rollerblading, skateboarding and BMX on a 2000 square metre street platform, participate in graffiti workshops, discover hip-hop and axcessboard (derived from skateboarding), play networked video games, and more.

Do your children love comics?  During the first-ever comics festival at Corbier, they can participate in drawing workshops, readings, sales and dedications, as well as watching animated films, visiting exhibitions, and many other activities.

On the programme this week: performances for kids such as the Facéties de Pinto, as well as face-painting stands, giant wooden games, and cabaret.  And for mum and dad’s pleasure, it is all free! 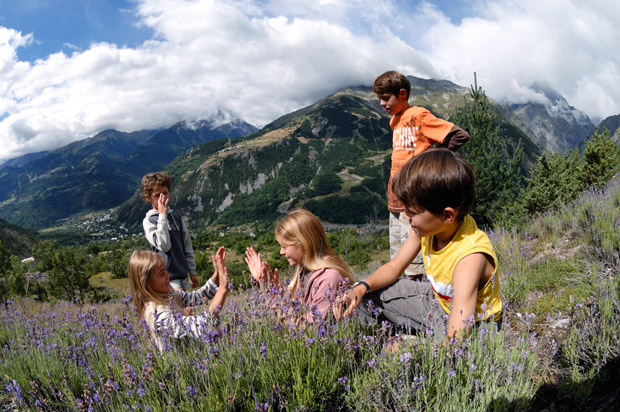