On foot, bicycle or horseback, trekking is really flourishing in the mountains. The promise of wide-open spaces, a daily change of scenery and countless different encounters can be addictive according to experts. That’s fortuitous because our mountain ranges are offering more and more getaway ideas for trekkers; with à la Carte escapes to suit wandering spirits, adventurers at heart and comfort lovers too thanks to the wide range of stopover accommodation available. Here’s our choice of itineraries (which can be carried out in one go or in sections, adopting a relaxed or sporty approach, or a combination of the two!)

Open in full from June to October, La Route des Grandes Alpes is a legendary itinerary. It takes travellers on a 720-kilometre trek between Thonon-les-Bains and Nice, via 17 of the most beautiful mountain passes in the French Alps (Iseran, Galibier, Lautaret, Izoard...). The landscapes are stunning throughout the route so set your smartphone to panoramic mode! There are also countless curiosities well worth stopping off to see along the way! Car drivers and motorcyclists have long adored this historic route, which was created by the French Touring Club at the dawn of the 20th century and completed in 1937. For cyclists and cyclo-tourists, climbing six major-level mountain passes is akin to the Holy Grail! “La Grande Traversée des Alpes” association, which developed the RGA for over 40 years and still keeps it going, has a very detailed website providing all the information required to tackle it in one go or in sections, and it also lists over a hundred accommodation options. Make a choice to suit your mode of transport and personal preferences in terms of comfort, services and budget. 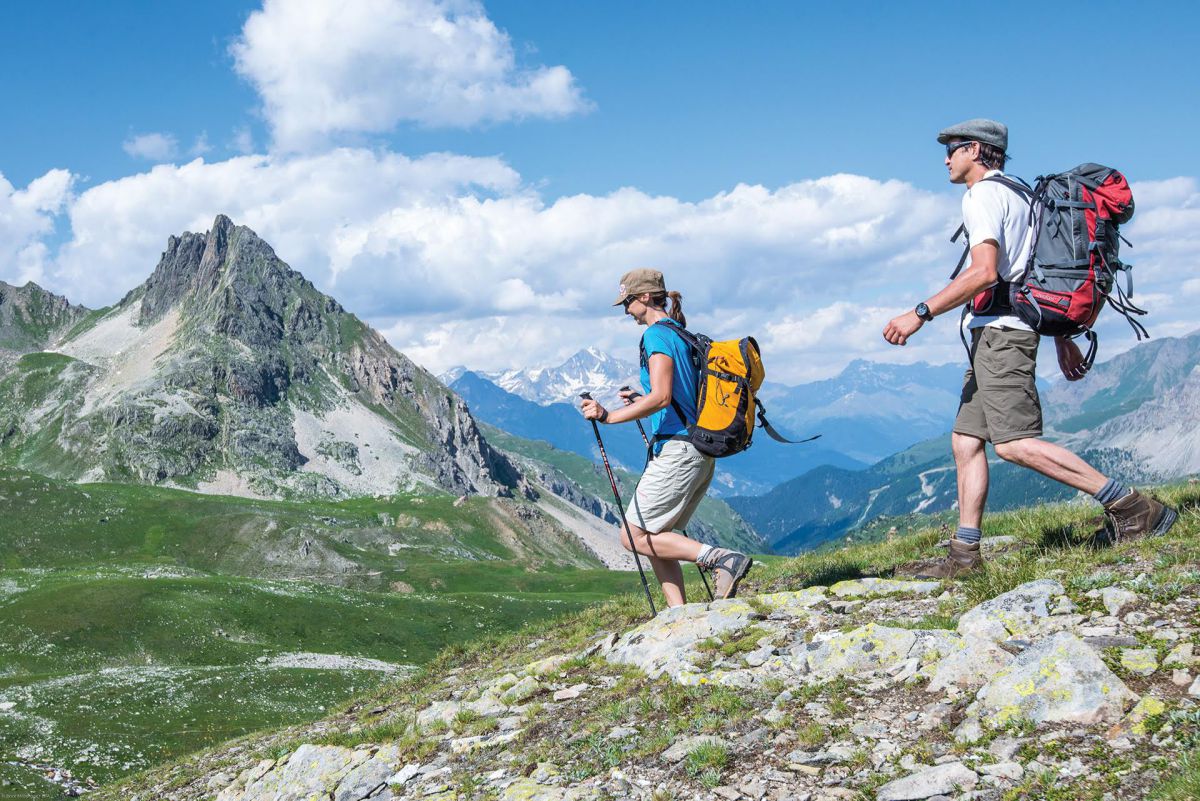 A mountain biking variant of the GR5 Alpes (a 40-section footpath across the Alps), Les Chemins du Soleil is a mountain bike route connecting the shores of Lac Léman and the Mediterranean via single track-style climbs and descents. A good level of physical fitness and training preparation is essential for this almost 900-kilometre itinerary designed for die-hard mountain bikers. The website of the GTA, which created the route, offers suggestions for 3 to 7 day breaks, including a VAE (electrically assisted bicycle) option. Titled ‘Les P'tites Routes du Soleil’, it’s a way of exploring the Préalpes without overdoing it, riding along peaceful little roads knowing you can recharge your bike’s batteries every 40 kilometres on average (100 charging points are listed). It’s the only one of its kind for the time being! 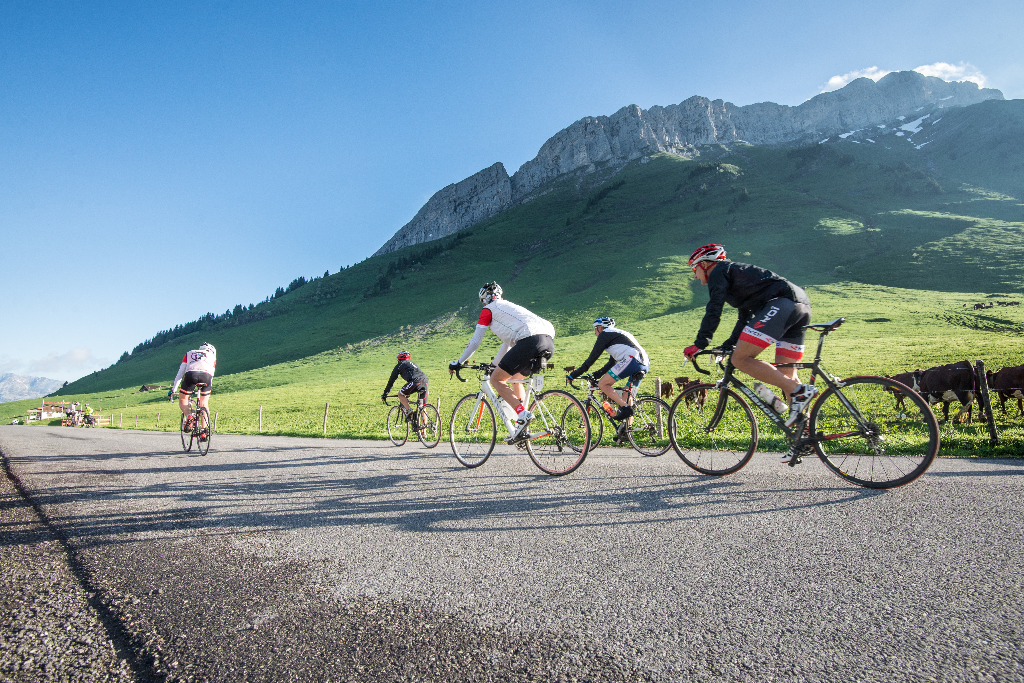 This long-distance itinerary runs north to south through the Jura Mountains, from Mandeure in Le Doubs, to Culoz in the Ain department. In summer, you can hike, mountain bike, cycle or horse-ride (as well as snowshoe and cross-country ski in winter). The landscapes vary from one to the next: denuded crests from which the Mont Blanc mountain range or Lac Léman emerge, spruce and leafy forests, vine-covered hillsides, pastures, peatland, a number of lakes and watercourses. On foot, the 400 kilometres can be divided into a gentle 20 to 25 kilometre climb a day for the whole thing, or alternatively in 3 to 5 day sections. It’s an ideal warm-up before tackling more demanding itineraries, such as the GR5 Alpes or the GR10 in the Pyrenees. The horseback version was launched last year: 500 kilometres between Crosey-le-Petit and Arbignieu in the Ain department, interspersed with thirty equestrian stop-off points so riders and horses can rest. Over a 3-day circuit starting at Frasnois (800 metres), discover the village of Pays des Lacs and the Haut-Jura regional nature park. 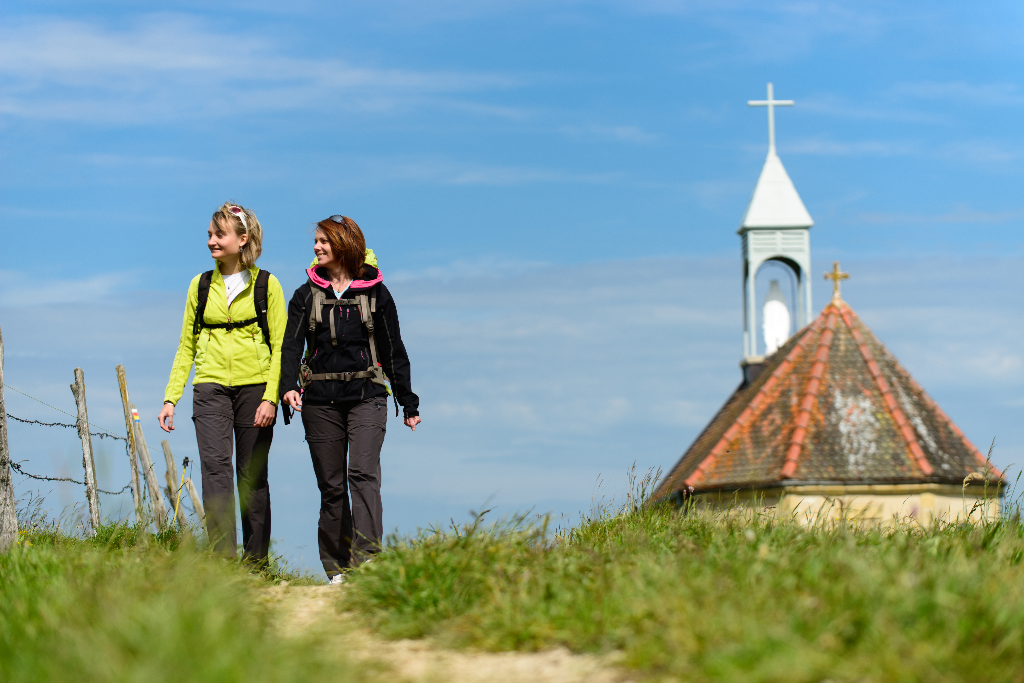 Numbering among the classic self-led hiking routes (a topographical guide of which was republished by FFR last year) in its entirety the Traversée du Massif des Vosges, some 540 kilometres on the GR53 and GR5, is a gentle 17-stage hike between Wissenbourg and Belfort. It winds along the foot of Vosges’ major summits: le Grand Ballon (1,424 metres), le Rothenbachkopf (1,316 metres), and le Hohneck (1,363 metres). On a clear day, you can see the Alps from these elevated viewing points. The TMV’s paths pass through two regional nature parks and unveil an assortment of landscapes: peatland, ponds, lakes, dense forests, mountain pastures, high-altitude prairies teeming with precious plant life. This wild and spectacular footpath is also marked by human history. A number of castle forts can be seen along the way, including the famous Haut-Koenigsbourg. For a gentle way to explore the Vosges, the Massif des Vosges website has a great many themed hike suggestions. By car, the panoramic Les Crêtes route, between Cernay and Sainte-Marie-aux-Mines, in Les Hautes-Vosges (90 kilometres), reveals the true heart of this weather-beaten mountain range.

Almost 1,000 kilometres separate the Atlantic and the Mediterranean on the famous GR10, on the north – French – side of the Pyrenees. No fewer than 4 topographical guides are therefore required to cover this mid-mountain hiking route passing through six departments and two regions. Obviously, it takes some time – around fifty days – to complete the whole thing, or alternatively it can be divided into several chunks. The itinerary between Hendaye and Banuyls offers a number of options using local networks of signposted paths through this “island” between the sea and the ocean. Circuits can be followed on foot, mountain bike or horseback. Highlights along the way: the forest of Iraty, Lac de Gaube, the Cirque de Gavarnie, the Tourmalet region, the foot of the Pic du Midi de Bigorre, Luchon and the Beille Plateau. As part of its ‘Contrat de Destination’, the Pyrenean Tourism Confederation is putting the finishing touches to the new Pyrenees-Gave-Adour cycling path (V81), which totals 150 kilometres between Bayonne and Perpignan via shared and green roads. It is due to be finished in 2017 but several sections in Aude have already been completed, making it a gentle way to discover the Pyrenees.